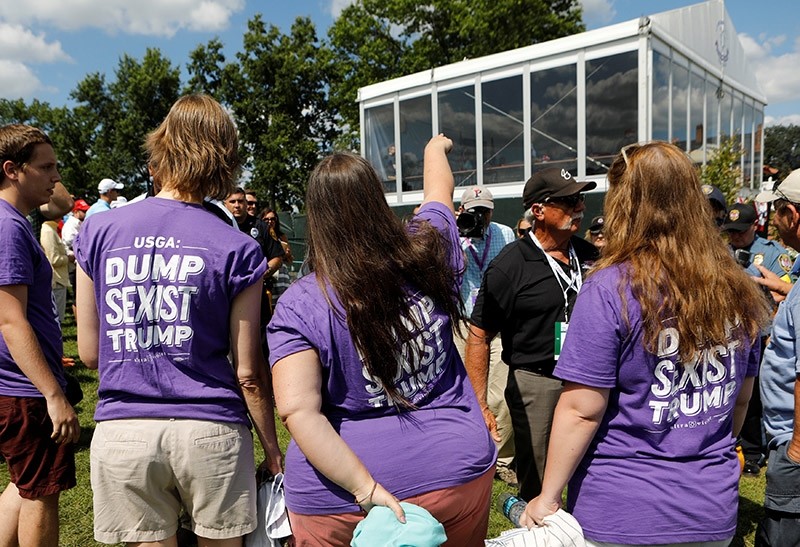 After three tranquil rounds at Trump National Golf Club, things heated up outside the ropes during Sunday's final round of the U.S. Women's Open as activist groups staged protests against U.S. President Donald Trump.

There had been calls for moving the tournament, which was awarded to Trump National in 2012 long before he officially entered politics, by women's groups angered by his campaign rhetoric and behavior they found to be misogynistic.

First local activists sported pink umbrellas on the warm, sunny day and spelled out messages written on their white tee-shirts as they posed in front of the Trump National clubhouse.

"RESIST!" was the message on the front as seven women wore one character each on their chest. They then turned around and formed the message "This is not NORMAL".

National group UltraViolet waited until they sighted President Trump enter his private viewing box that looks out on the 15th green, 16th tee and 18th green before revealing a message on their purple tee-shirts - "USGA: DUMP SEXIST TRUMP".

"Our shirts are our message," said Melissa Byrne of Philadelphia, a spokesperson for the UltraViolet group.

"We want the USGA to dump sexist Trump because women and men deserve to make sure that they are safe and that sexual predators are not considered ambassadors of sports."

Before the four protesters showed off their message with another member snapping pictures, Byrne told Reuters that they wanted to look President Trump right in the eye.

"He saw us, number 45 saw us, that we were out here and I could tell by the chatter and the way that they looked at us that they all saw us," she said about the 45th U.S. president and his staff.

Hope Singsen of New York City was one of those demonstrating for UltraViolet, who earlier in the day staged a motorcade outside the grounds to express their displeasure with the U.S. chief executive.

"Like millions of women and men I am the victim of sexual violence," Singsen told Reuters. "I've been nauseated by the fact that somebody with this guy's past and pleasure in abusing women is in this position of leadership.

"Anything that I can do to bring about a change in that situation, I will be there doing it."