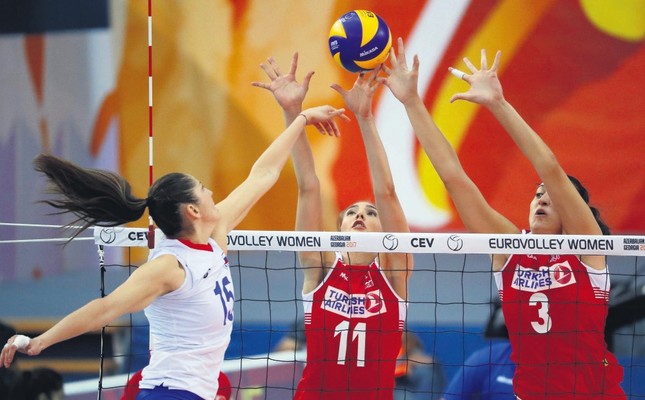 Turkey beat Poland 3-1 to clinch a spot in the women's EuroVolley quarterfinals and set up a rematch with Russia, where the ‘Sultans of the Net' will be eyeing revenge for an earlier 3-1 loss

Turkey had to work hard but they eventually secured their spot in the quarterfinals of the 2017 women's EuroVolley in Baku as they stood up to the challenge brought by a young, determined and dynamic Polish team.

This matchup was a remake of the "grand finale" Turkey and Poland had contested two years ago in Baku as well when Azerbaijan's capital hosted the inaugural European Games.

Poland caught a promising start to the match but Turkey eventually edged ahead for the first time at 11-10 their way. Güldeniz Önal, Gözde Kırdar and Meryem Boz helped Turkey breakaway after the second technical time-out and the "Sultans of the Net" were able to hold on to their advantage to secure a 25-22 win.

Turkey displayed their attacking power in the early stages of the second set to storm to a 13-6 lead, but after a break Poland somehow found their way back into the game, producing an impressive 9-2 run to draw level at 15-all.

Turkey responded with a short positive series on their end (18-15) before Poland rising star Malwina Smarzek restored parity (18-18) with an ace. The young players in Poland played with much resilience and composure as the set approached its end, leading by two at 23-21.

Turkey canceled two set points for Poland before taking the most exciting rally of the game to double their lead in the match (27-25). Poland set the tempo of the game from start to end of the third set (25-18) and they just did the same for most of the fourth one as well.

Turkey, however, surged back and at 23-21 could set their sights on the finish line. Poland fought back to 23-all, but Turkey finished it all off shortly afterward with a monster block to seal their spot in the quarterfinals and go for a remake of their pool match with Russia - where they will be hoping to make amends for the 1-3 loss they suffered on their tournament debut.

Captain of the Turkish team Eda Erdem Dündar: "It was really close, but we actually started very good and won the two first sets. After that, they started serving really well and did a great job in defense and we could not score even on a single block. We were behind also in the fourth set, but we caught up with them and fought until the last point. We believed that we could win this game and in the end, we did, which makes me so happy! We are in the quarterfinals and will face Russia now. Both teams know each other well, so we know what to do and what not to do."

Today, Germany will play hosts Azerbaijan for a place in the semis. The German team will be trying to improve on their previous bout in Pool A where they took one set from the home side, the only one Azerbaijan have dropped so far in the tournament.

Share on Facebook Share on Twitter
Previous in Sports Bayern Munich fired Carlo Ancelotti as coach on Thursday after the... Next in Sports Female tennis players still do not receive the credit they deserve...
DAILY SABAH RECOMMENDS