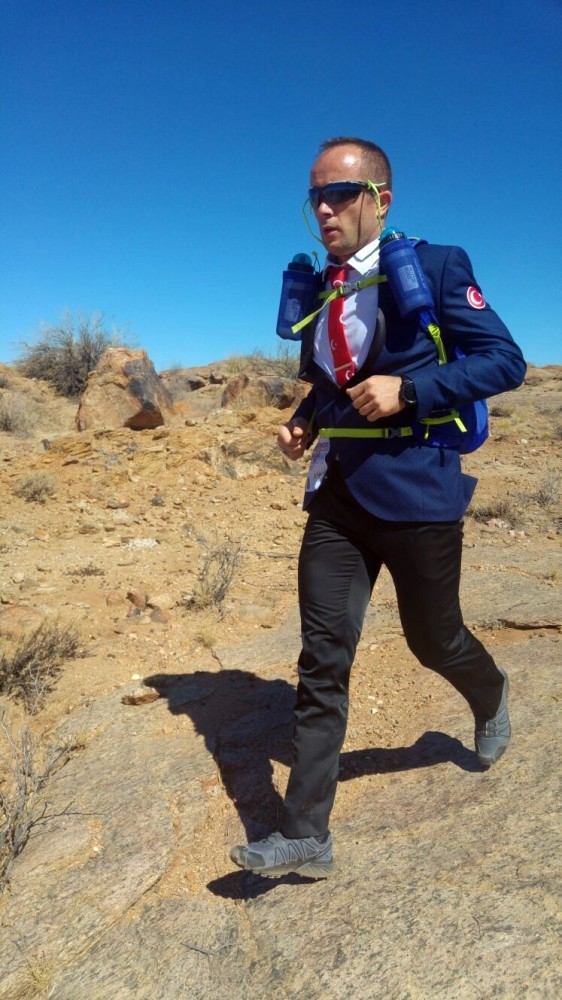 Representing Turkey at the Kalahari Marathon, Bilal Gül is enduring 50 degrees Celsius to draw attention to the hardships of cystic fibrosis patients

Known as the "runner dressed in suit," Bilal Gül is representing Turkey at the Kalahari Augrabies Extreme Marathon that kicked off in the Kalahari Desert, South Africa on Oct. 28. Wearing a different suit every day and matching ties patterned like the Turkish flag, Gül will run 250 kilometers in one of the world's hottest deserts. "To draw attention to the hardships of cystic fibrosis patients and their families, I will endure this hot desert and run 250 kilometers, dressed in a suit and tie, carrying a 15-kilogram backpack," the Turkish athlete told fascinated reporters after finishing day four of the weeklong event.

The Kalahari Augrabies Extreme Marathon, attended by only 100 runners from around the globe, is known as a "self-sufficient run." The participants are not provided with any food or water, rather they are allowed to carry around 15 kilograms of supplies in their backpacks. They also face the risks of coming face to face with venomous snakes or other wild animals in the desert where temperatures can reach as high as 50 degrees Celsius. Runners are not also allowed to receive any outside help and even a tiny mistake can cause a runner to get disqualified.

Gül, born in Malatya in 1982, started pursuing athletics as a hobby to quit smoking and lose weight when he was working as a serviceman for a home appliance company. He had his first ultra-experience at the Çekmeköy 60-kilometer running competition. Unable to finish the run, he met another participant, Hüseyin Burgaz at the event. Since then, the two have supported each other on the tracks and made huge improvements over time. In March 2016, they ran a 42-kilometer marathon in suits for the first time at the Antalya Marathon to promote their group. They completed the race in 4 hours 11 minutes and have come to be known as the "suit runners."