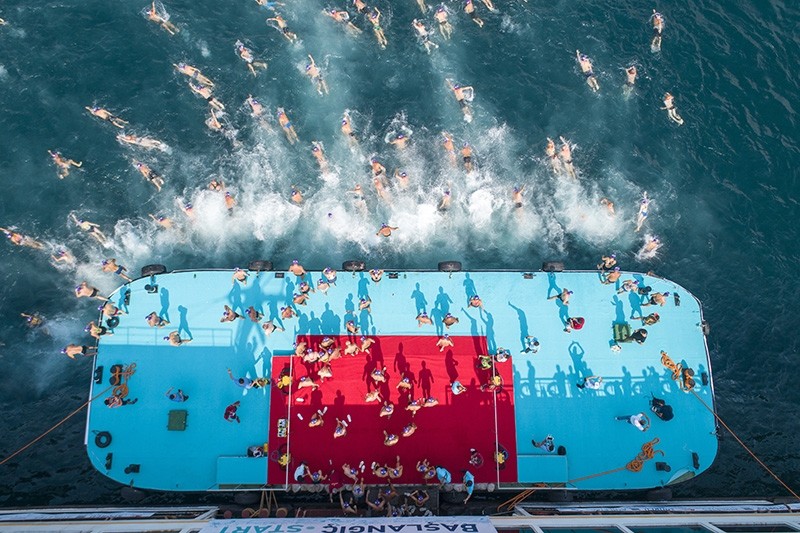 What better way to spend a scorching Sunday than jumping into the cool waters of the Bosporus? Thousands took this rare chance when Istanbul's famed waterway opened for swimmers to make their way between Asian and European sides of the city.

The 30th edition of the Bosporus Cross-Continental Swim sponsored by Samsung saw some 2,400 swimmers splashing into the waterway – from people who came from as far as the United States to an 89-year-old resident of Istanbul.

Dubbed one of the best open-water swimming events in the world, the race started at 10 a.m. with swimmers on a pontoon leaping into Bosporus near the seaside district of Kanlıca on the city's Asian side. Amateurs indulged in the scenery, while professionals were more focused on the tough 6.5-kilometer route that ended in Kuruçeşme, a few kilometers away from the July 15 Martyrs Bridge.

In the women's category, Turkish athlete Hilal Zeynep Saraç came in first with a time of 50 minutes 30 seconds. Another Turkish swimmer, Buse Topçu, ranked second and Amy Dantzler of the United States followed by 10 seconds to clinch third.

"I don't know how I came first," Saraç said after finishing the race, pointing out the difficulty of navigation. Although the current facilitated the race, swimmers had a hard time pinpointing their destination as some failed to navigate effectively.

"I was scared at first because of the big waves. I found myself in a current pushing me back," she said, speaking of other difficulties she faced as well.

"This was a good chance for training before Denmark," said Saraç, a professional swimmer who will join a swimming competition with the Turkish national swimming team in that country in August.

Youth and Sports Minister Mehmet Muharrem Kasapoğlu gave the starting signal at the Kanlıca pier, as athletes began the race in several heats. Each athlete had a chip attached to his or her ankle to track the race time.


The Bosporus is not a safe place to swim freely as its busy maritime traffic sees dozens of oil tankers, cargo ships and ferries navigating their way in this narrow strait every day. It was closed to maritime traffic for the duration of the race. Rescue boats accompanied swimmers in case of emergencies.

About 4,400 people applied to participate in the race, but only 2,400 were chosen by the organizers. Half of the athletes in this year's competition were foreigners, with Russia and Ukraine contributing the largest portion of applicants. Last year, Russians took first place in both the men's and women's races.

The majority of the racers were men, and their professions ranged from professional swimmers to academics, politicians and students. The organizers say there was an overwhelming demand that saw the registration process closed in less than a half-hour as foreign swimmers grabbed all the available spots.

The cross-continental race has gained international renown since it was first organized by the Turkish National Olympic Committee in 1989, with the participation of only 68 swimmers. Last year, the World Open Water Swimming Association (WOWSA) named the Bosporus course as the best in the world. And, in 2016, it was named "offering of the year."