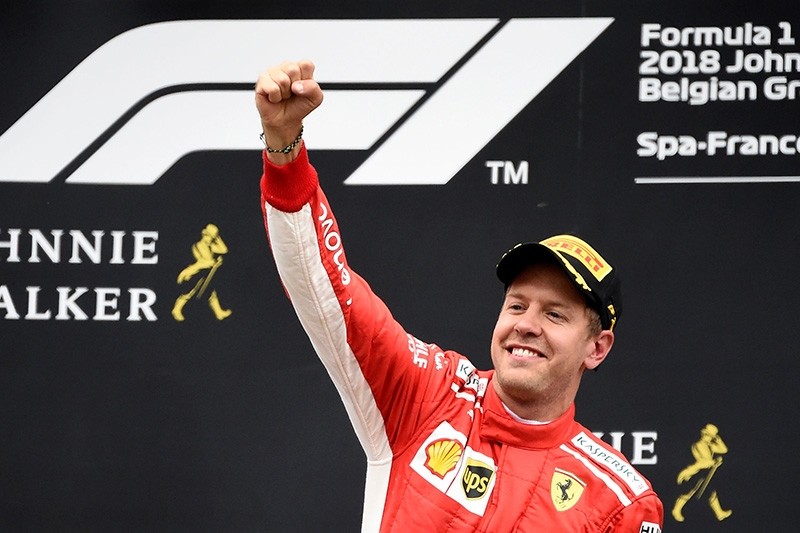 Winner Ferrari's German driver Sebastian Vettel celebrates on the podium after the Belgian Formula One Grand Prix at the Spa-Francorchamps circuit in Spa on Aug. 26, 2018. (AFP Photo)
by Associated Press Aug 26, 2018 12:00 am

Sebastian Vettel made a crucial early overtaking move on Lewis Hamilton to win the crash-marred Belgian Grand Prix on Sunday and trim his rival's overall lead.

Hamilton started from pole position for a record fifth time at Spa, and a record-extending 78th in Formula One, with Vettel second on the grid.

But Vettel has a knack for quick starts, and nudged his Ferrari past Hamilton's Mercedes on the first lap with a smart move down the left.

"I had a great start. I knew my chance would come," Vettel said. "Timing is crucial and I managed that perfectly I thought."

It came moments after Fernando Alonso's McLaren flew through the air and landed on top of Charles Leclerc's Sauber. Leclerc, unharmed, was likely spared a head injury by the protective halo device surrounding the cockpit area of F1 cars.

Moments after his victory, Vettel removed his steering wheel and held it aloft, almost like a trophy, as he stood on his car to celebrate. Then he jumped into the arms of his mechanics and grabbed a Ferrari flag. With eight races remaining, it was a crucial win to halt Hamilton's momentum.

It also moved Vettel one ahead of four-time F1 champion Alain Prost for third in all-time wins behind Hamilton (67) and Michael Schumacher (91).

"He drove past me like I wasn't even there on the straight," Hamilton said, expressing concern for Ferrari's greater speed. "Congratulations to Seb."

Hamilton's teammate Valtteri Bottas, starting near the back after being penalized for too many engine changes, overtook Sergio Perez late on to place fourth.

Hamilton initially held his lead, but Vettel overtook him sharply as they headed onto the Kemmel Straight. Vettel then held off Perez, who had jumped up from fourth to third by overtaking his Racing Point Force India team teammate Esteban Ocon.

The heavy crash at the start happened when Hulkenberg bumped into the back of Alonso, sending Alonso's McLaren spinning and then flying up in the air.

It led to a safety car coming out on track.

Under safety car rules, drivers have to hold position and are not allowed to accelerate.

Starting from sixth place, Raikkonen lost his rear right tire after being clipped by Ricciardo — who retired later after running a lap down because of time he lost while his team repaired the damage on his car picked up during the chaotic start.

Vettel has been sloppy recently, crashing in the rain while leading the German GP and then losing position in qualifying for the Hungarian GP, once again in the rain.

This time the rain stayed away, and Vettel looked more composed.

When the race re-started, on lap 4 of 44, the German driver smartly blocked an overtaking attempt by Hamilton.

"I had a great re-start, I kept it clean," Vettel said. "After that it was a very smooth race."

Verstappen, meanwhile, displayed his usual slick overtaking by getting past Ocon and making light work of catching Perez to move into third — delighting the orange-clad Dutch fans congregated around the 7-kilometer (4.3-mile) Spa track nestled in the Ardennes forest.

Raikkonen was the previous Ferrari driver to win here, back in 2009, but his quest for a first F1 win since the season-opening Australian GP in 2013 ended with a mechanical failure on lap 9 — the third time the Finnish driver has failed to finish this season.

Up ahead, his teammate led Hamilton by 3.5 seconds at the halfway stage, when Hamilton pitted for new tires.

Vettel came in moments later and his stop was clean enough to see him regain the lead, but only a narrow 1.3 seconds ahead of Hamilton.

Ferrari's greater speed on the straights helped him pad that advantage out within a few laps, and he coasted home.

Both drivers have five wins this season as they seek to win a fifth F1 title and move level with Argentine great Juan Manuel Fangio, and move within two of Schumacher's all-time record.