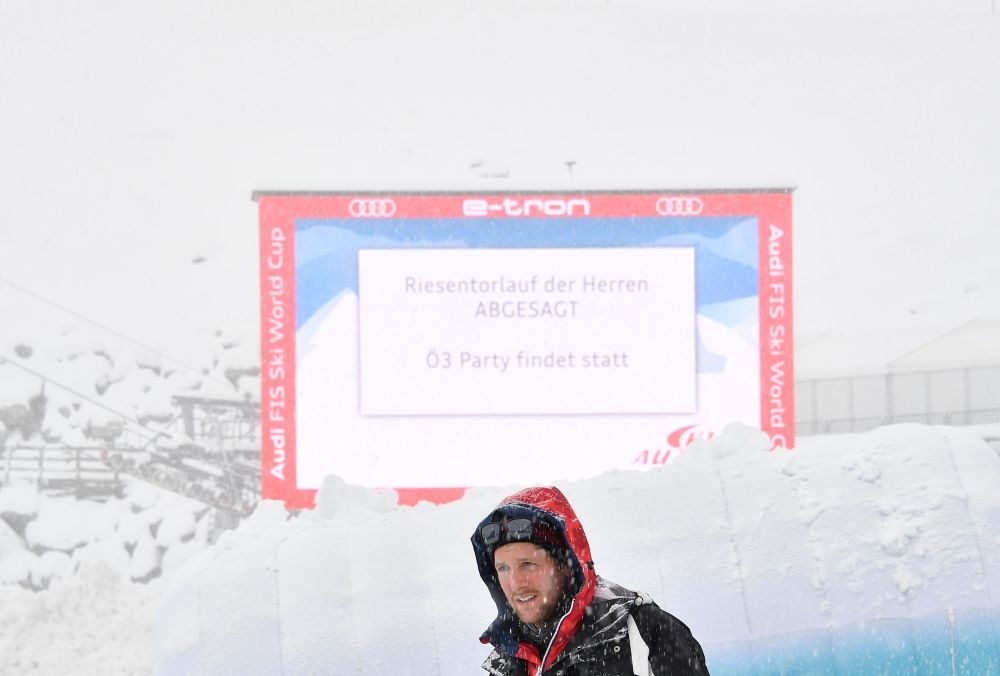 A large display announces the cancellation of the men's giant slalom competition due to heavy snowfall and strong winds during the FIS Alpine Ski World Cup on Oct. 28, Soelden, Austria.
by Nov 02, 2018 12:00 am

German alpine ski director Wolfgang Maier's dearest wish was granted. "We are desperate for snow because it's really been lacking. Alpine skiers need snow," he said. The alpine ski chief was speaking in a room full of skiers less than two weeks ago. After an unusually warm October, the traditional World Cup season-opening race in Soelden was in danger of being cancelled. In the end the men's giant slalom race on Sunday at the Austrian venue had to be scrapped. Yet it wasn't a lack of snow, but too much of it, which led to the cancellation in the end. Safety on the Rettenbach glacier in the Oetztal could not be guaranteed. Climate change is posing great challenges not only for politicians and consumers, but also for winter sport. Former winter sports greats are worried. "The development is really dramatic and scary," said former ski racer Christian Neureuther in an interview with the Straubinger Tagblatt newspaper.

His great-grandfather used to measure the glaciers of the Alps: today often nothing is left. If climate developments continue as now, the popular October season start on the high-altitude slopes of Soelden should be postponed to November, he says.

"It's all about having pictures of natural snow and mountains, which are inviting for a holiday. It doesn't help skiing when you can see only stones and rocks next to the slopes," he said. Whether they are Nordic skiers, biathletes or alpine skiers, winter sports athletes and enthusiasts are increasingly worried about what is happening to their venues. The development has been described as "frightening" by Germany's Nordic combined Olympic champion Eric Frenzel.

"When I was a teenager on the Dachstein glacier, I was able to fasten my skis on the tracks and start off. Now you have to be on the road for a while before you get to the trails," he said. The lack of snow affects alpine skiers most of all. More than other winter sports, they rely on snow and cannot switch so easily to roller skis, as biathletes can, or mats, used by ski jumpers.

"You always have to be more creative with course planning," German alpine skier Fritz Dopfer said. The alternative, he said, is training in Argentina or New Zealand. Ski chief Maier said: "This year, for the first time, we considered whether we should open a base in South America because the winter was really good there."