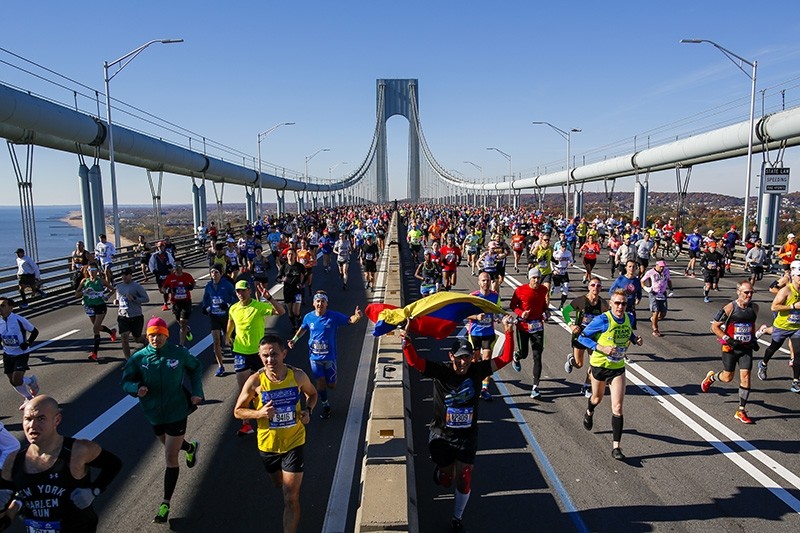 Desisa, coming on strong in the final mile, claimed the victory in an unofficial two hours, five minutes and 59 seconds as he and fellow Ethiopian Shura Kitata (2:06:01) passed defending champion Geoffrey Kamworor, who finished third in 2:06:26.

The victory was Keitany's fourth in New York in the last five years. She won in 2014, 2015 and 2016 before coming in second last year to American Shalane Flanagan. Keitany joined Grete Waitz as the only women to win the marathon four times. Waitz, a Norwegian, won the marathon nine times between 1978-1988.

"I can say the course record was not in my mind," Keitany said. "For me, winning was very important."

She and Ethiopians Rahma Tusa and Gudeta turned their race to a three-woman field at the 15-mile mark. Keitany pulled away from Tusa and Gudeta at the 19-mile mark, leading Tusa by 26.58 seconds and Gudeta by 43.98 seconds. She extended her lead over Tusa to 1:27.83 at the 21-mile mark.

From that point, the question was not whether Keitany would win. Rather, it was by how much.

"You have to find motivation, things to focus on," Flanagan said. "When I finally got to third place, I got another level of excitement because I was fighting."

The United States had four women finish in the top 10: Molly Huddle was fourth, Desiree Linden was sixth and Allie Kieffer was seventh.

"I need air and I'm in pain," said Romanchuk, a 20-year old from Champaign, Illinois, who won the Chicago Marathon last month. "It's wonderful to be able to win my two Abbott major marathons on American soil. It's an amazing experience."

Manuela Schar of Switzerland repeated as the winner of the women's wheelchair division. Schar, who also won the Berlin and Chicago marathons, finished with a time of 1:50:27. American Tatyana McFadden finished second with a time of 1:50:48. Lihong Zou of China came in third. Eliza Ault-Connell of Australia and Margriet Van Den Broek of the Netherlands finished fourth and fifth.