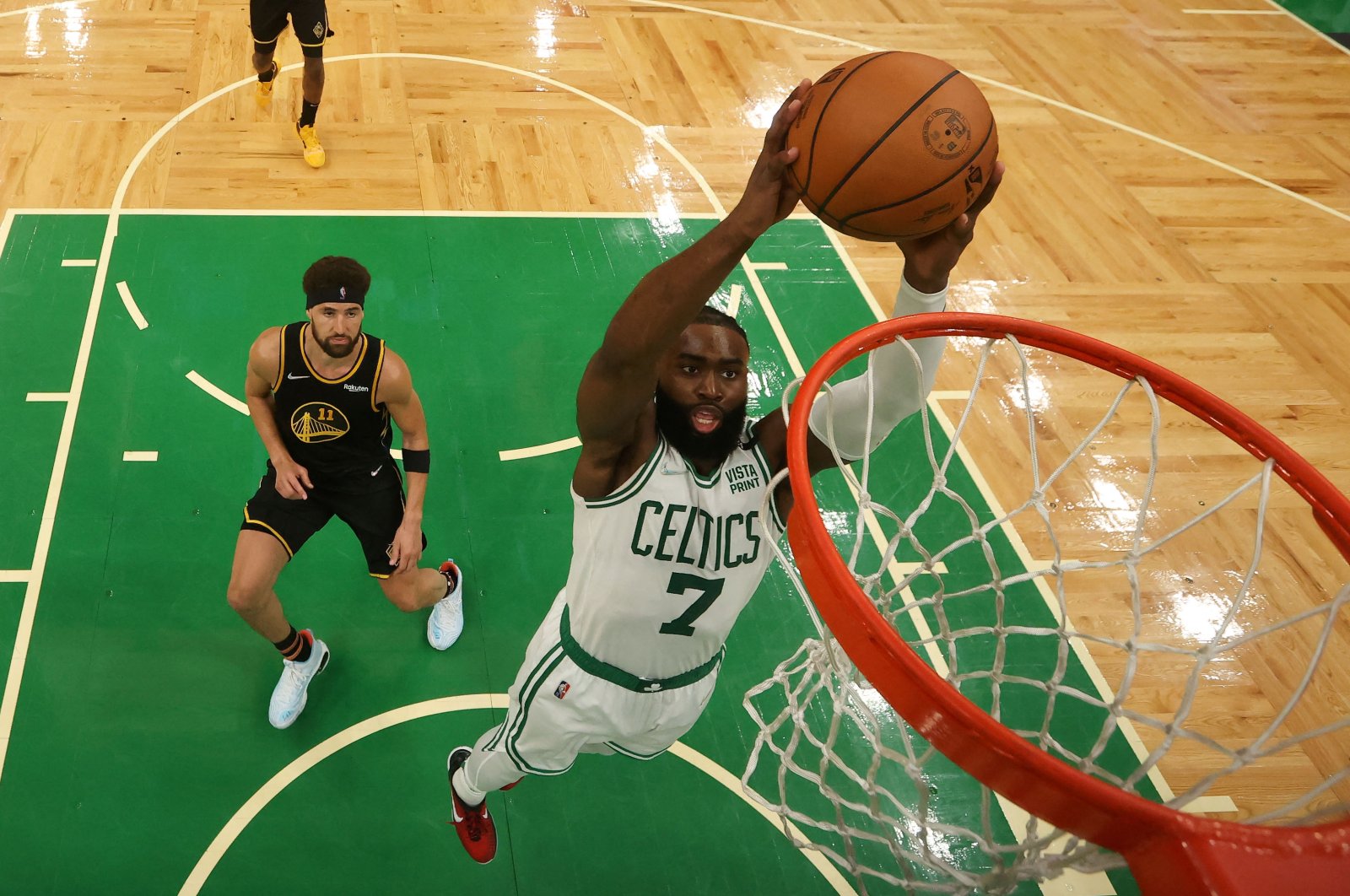 A combined 53 points from Jayson Tatum and Jaylen Brown took the Boston Celtics over the Golden State Warriors for a 116-100 win and a 2-1 lead in the NBA Finals Wednesday.

Boston, bullied by the Warriors in a Game 2 blowout in San Francisco on Sunday, bounced back with a dominant physical performance to regain the initiative in the best-of-seven series in a pulsating clash at the Celtics' TD Garden.

Brown led Boston in scoring with 27 points, while Tatum had 26 points and Marcus Smart 24 as the Celtics moved to within two wins of a record 18th NBA crown.

Robert Williams III was the star of a rejuvenated Boston defensive performance, hauling in 10 rebounds, blocking four shots and pilfering three steals to frustrate the Warriors.

Stephen Curry led Golden State with 31 points while Klay Thompson rediscovered his scoring touch with 25, but it was not enough for Steve Kerr's side.

Celtics coach Ime Udoka pinpointed the rugged physical displays of Williams and Al Horford as a key to the win.

"We want to try to impose our will and size in this series," Udoka said. "It's going to be a back-and-forth battle as far as that, but when we get nights like this from (Williams and Horford), obviously it pays dividends for us."

Warriors coach Kerr meanwhile said his team had been "plugging holes" throughout.

"They did a good job. They earned the win. They put a lot of pressure on us and felt like we were kind of swimming upstream most of the night," Kerr said.

It looked as if a Warriors comeback was on the cards after a Curry 3-pointer late in the third quarter gave Golden State their first lead since the opening seconds of the game at 83-82.

But Boston refused to buckle and regained the initiative to lead by four points heading into the final quarter.

The Celtics then surged clear with a 9-2 run at the start of the fourth to jump out to an 11-point lead before closing out a deserved victory.

A miserable night for Golden State was capped by defensive talisman Draymond Green fouling out in the fourth quarter to a cacophony of jeers from the Boston crowd.

"He had a tough game, but I trust Draymond as much as I trust anybody," Kerr said. "He always bounces back from losses and from tough nights individually. He'll be back on Friday."

Earlier, the Celtics had jumped on the Warriors in the first quarter, racing into a 10-4 lead.

With Boston's defense swarming all over Golden State, the Warriors were never able to generate any scoring momentum.

Instead, it was Boston who kept the scoreline ticking over with Brown leading the way as the Celtics moved into a 15-point lead before finishing the first 11 points clear.

The Warriors improved their shooting markedly in the second quarter but a determined Boston maintained their double-digit advantage, outscoring the Warriors 35-34.

There were signs of a Warriors revival after the Celtics had stretched into an 18-point lead midway through the quarter, with Thompson and Curry both knocking down threes to help reduce the deficit to seven points at 56-49.

But whenever the Warriors seemed poised to close the gap further, Boston responded with a big play. Al Horford's steal set up a dunk for Brown, who finished the half with 22 points as the Celtics took a 68-56 half-time lead.

Boston started the third quarter in the same manner, managing to re-establish a double-digit cushion whenever Golden State made a dent in the Celtics lead.

Eventually, though, the Warriors' offensive pressure told and the momentum shifted in a matter of seconds when Curry's 3-pointer cut the Boston lead to six points at 82-76 with just over five minutes in the period remaining.

A flagrant foul by Horford turned it into a 4-point play and Otto Porter Jr's three-pointer from 26ft made it a 2-point game.

But Boston powered back with Grant Williams draining a 3-pointer to put the Celtics seven points clear at 93-86 before Thompson hit back from beyond the arc to make it a 4-point game heading into the fourth.

Any hopes of a Warriors recovery were snuffed out in the Celtics decisive burst of scoring in the final period.