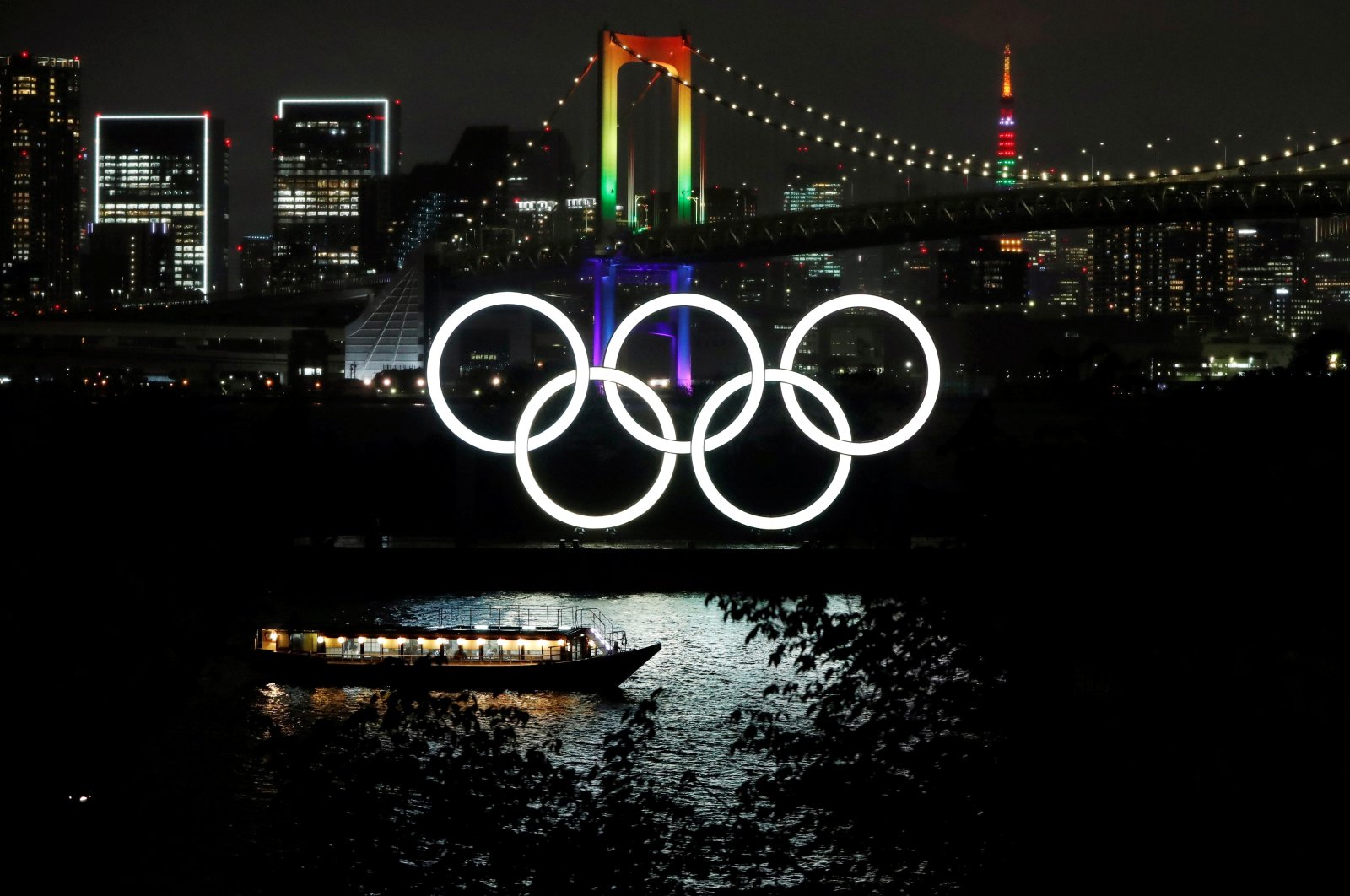 The Rainbow Bridge and Tokyo Tower are illuminated with Olympic colors to mark 100 days countdown to the Tokyo 2020 Olympics that have been postponed to 2021 due to the coronavirus disease (COVID-19) outbreak, in Tokyo, Japan April 14, 2021. (Reuters Photo)
by French Press Agency - AFP Apr 15, 2021 9:22 am
RECOMMENDED

As a surge in COVID-19 cases in Japan continues, a senior politician said Thursday there is still a possibility that the Tokyo Olympics could be canceled due to the pandemic.

Toshiro Nikai, the ruling Liberal Democratic Party's No. 2, said the Olympics must be canceled "without hesitation" if the virus situation is too severe.

A year after their historic postponement, the 2020 Olympics remain beset by pandemic problems, with parts of the torch relay forced behind closed doors and public support consistently low.

Organizers and Olympic officials insist the Games will go ahead safely, but Nikai said Thursday that all options were on the table.

"We need to make a decision depending on the situation at the time," he told the private TBS television network.

"We need to cancel it without hesitation if they're no longer possible," added Nikai, who is the LDP's secretary-general.

Asked if he considered cancellation an option, Nikai said: "Yes of course."

"If the infection spreads because of the Olympics, I don't know what the Olympics is for."

He added however that he sees the Games as an "opportunity", and it was "important for Japan to foster excitement with support from the public".

"We definitely want to make a success. In order to do so, there are various issues to solve. It's important to solve them one by one."

The comments were quickly dismissed by an unnamed LDP official who told the Jiji news agency: "The Games will not be canceled."

Tokyo Governor Yuriko Koike said she had "been told that the comment meant it is an option".

"I take it as a message of strong encouragement that we contain the coronavirus by all means."

Nikai's remarks come with fresh worries in Japan about what experts have called a fourth wave of infections.

Record numbers of cases have been reported in Osaka in recent days, and the government has been forced to authorize new restrictions just weeks after lifting a virus state of emergency.

The surge has already forced the Olympic torch relay off public roads in Osaka, and a city in western Japan also announced Wednesday that it would cancel the public event.

'Neither safe nor secure'

Compounding the problem is the comparatively slow rollout of the vaccine in Japan, which has so far only approved the Pfizer/BioNTech version.

Around 1.1 million people in the country of 126 million have received a first dose of vaccine so far, with the rollout only expanding to the elderly this week.

Despite the problems, Olympic organizers insist the Games can be held safely and have released virus rulebooks to allay public fears.

Athletes will not be required to quarantine or be vaccinated but will have to limit movements and be tested regularly.

Overseas fans are barred from attending, with a decision on domestic spectators limits expected later this month.

However many fans are allowed to attend, the atmosphere will be markedly different from Games past, with cheering strictly banned.

Organizers note that sporting events are continuing in Japan, including some international fixtures like the World Team Trophy figure skating, which opens in Osaka Thursday.

But opinion polls show a majority of Japanese favor postponing or canceling the Games, with those in support hovering below 30%.

Medical professionals have also warned the Games are a risky prospect, with four experts writing in the British Medical Journal this week urging plans for the event "be reconsidered as a matter of urgency."

"International mass gathering events such as Tokyo 2020 are still neither safe nor secure," they wrote.

Despite the obstacles, International Olympic Committee vice president John Coates on Wednesday said organizers were "certainly not" considering a cancelation.

"Of course we're concerned, of course, safety remains our priority, but we believe that we're prepared for the worst situations," he said.