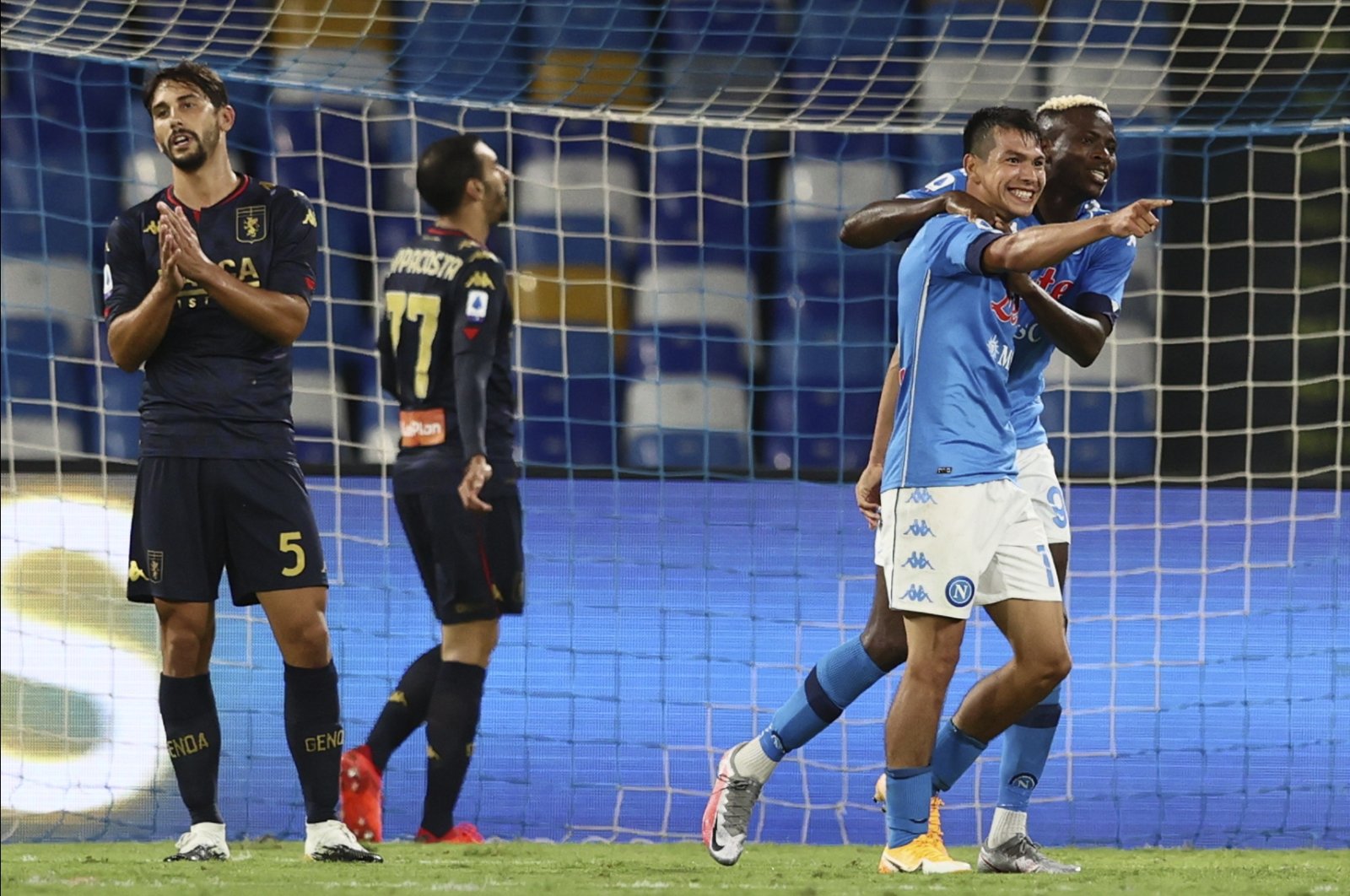 Napoli's Hirving Lozano, second from right, celebrates with Victor Osimhen after scoring his side's 4th goal during the Serie A football match between Napoli and Genoa at the San Paolo Stadium in Naples, Italy, Sept. 27, 2020. (LaPresse via AP)
by Agencies
Sep 30, 2020 7:09 pm

Italian health undersecretary Sandra Zampa on Wednesday asked the Serie A and the Italian Football Federation (FIGC) to decide on a possible break in the league after the high number of coronavirus cases reported at Genoa this week.

In a note from the Ministry of Health, Zampa backtracked after having told Radio Capital that "when the number of positive cases is so high, you cannot do anything but stop the league."

She said in the note that, according to the sanitary protocol, positive footballers cannot play until they have a negative swab test and that football authorities are to decide about how to continue the season.

The statement, however, does not mention that the government can impose a suspension of the league, as it did when Italy went into a three-month lockdown in early March.

Napoli announced Wednesday that there were no positive COVID-19 cases in its squad following the match against Genoa.

Although there were no positive results from the first swab tests, the club confirmed a second round will take place Thursday ahead of Napoli's trip to champion Juventus on Sunday.

Genoa, who has placed the infected players in a 14-day quarantine, is to play at home against Torino on Saturday.

Genoa president Enrico Preziosi told La Gazzetta dello Sport that eight of the 12 positives are footballers and that he hopes to have the game postponed.

"Besides the high number of positive footballers, we cannot even train with those who are negative," he said as Tuesday and Wednesday training did not take place.

As the Serie A was to decide on the issue later on Wednesday, FIGC said that Genoa and Napoli had followed the protocol.

"Clubs have shown attention and availability, even using stricter controls (with tests every two days) than requested by the current measures," said Paolo Zeppilli, head of FIGC's medical commission.

He said Napoli held individual training sessions Tuesday for the footballers who played against Genoa, while those who did not play respected social distancing measures in their workout.

Napoli also confirmed Tuesday that club president and owner Aurelio De Laurentiis has made a full recovery from COVID-19. De Laurentiis tested positive for the coronavirus on Sept. 10, a day after he attended a Serie A assembly alongside other leading Italian football officials.