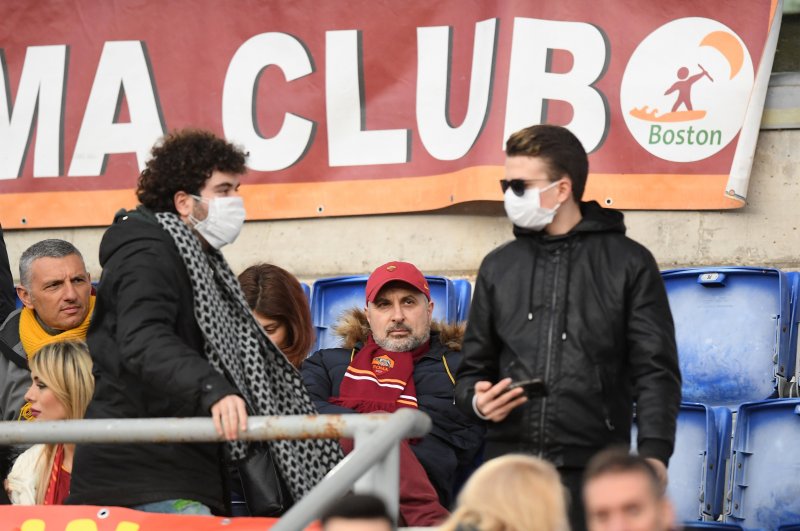 AS Roma fans wearing face masks inside the stadium before the match amid concern following a coronavirus outbreak in Italy, Feb. 23, 2020. (Reuters Photo)
by REUTERS Feb 25, 2020 10:59 pm
RECOMMENDED

It is not yet clear whether Euro 2020 will be affected by the coronavirus outbreak which has struck Italy, one of the 12 host countries, a vice president of European football body UEFA said Tuesday.

Italy's sports minister, meanwhile, said that a ban on events in the affected regions could be lifted Monday, though he added that it was a case of waiting to see what happens.

The death toll in Italy from the crisis reached 11 on Tuesday while more than 320 cases have now been reported, officials said.

A tourist from Lombardy, the worst-affected area, was diagnosed with the virus while on holiday in Sicily, and the regions of Tuscany and Liguria both reported their first cases.

The Italian government has banned sporting events in six regions of the country but has made an exception for Serie A football matches which can be played behind closed doors.

Six games are expected to go ahead in empty stadiums at the weekend, including the meeting of Serie A leaders Juventus and third-placed Inter Milan.

"If the data does not give us different indications, it may well be that from March 2 we will not extend the ban on sporting events," sports minister Vincenzo Spadafora told reporters. "We will see how it develops in the next few days."

"But safety and health come before anything else – before a match or before a full stadium," he said.

Rome, which has not been affected so far, is due to hold three group stage matches and one quarterfinal at the Euro 2020 tournament in June and July.

"We are at the waiting stage. We are monitoring country by country, and football must follow the orders of the individual countries," Italian Michele Uva, a member of the UEFA executive committee, told state broadcaster Rai.

"The sporting path will only be closed if the situation gets worse," he said.

The head of Italy's swimming federation, Paolo Barelli, told reporters that he was concerned about an Olympic qualifying women's water polo tournament due to be played in Trieste from March 8-15.

Rome will host a Six Nations match between Italy and England on March 14, with The Times reporting on Tuesday that tournament organizers were already concerned about the fixture.

Ireland's minister for health Simon Harris also said Tuesday that the Six Nations match against Italy scheduled for March 7 in Dublin should not go ahead.