Thousands of refugees rush across as Croatia opens border with Serbia 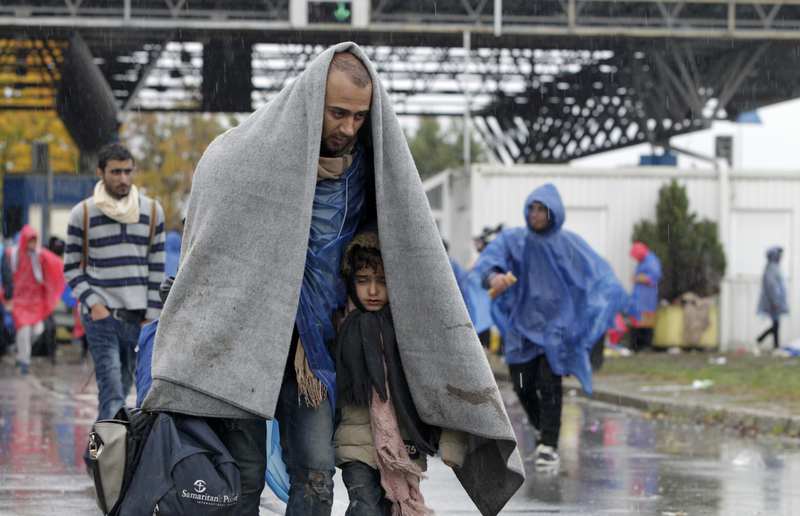 Refugees cover themselves with a blanket as they walk into Slovenia from Trnovec, Croatia, October 19, 2015. (REUTERS Photo)
by Associated Press
Oct 19, 2015 12:00 am
Croatia opened its border with Serbia for refugees on Monday, letting in thousands who have been stranded for nearly two days and partially clearing the human bottleneck that has been building up in the West Balkans.

The humanitarian crisis has been growing since Saturday, when Hungary closed its border with Croatia, creating a backlog of refugees in the region.

"The last person to go was a young boy without a leg, and we helped him cross in a wheelchair," Sunjic said.

There were between 2,000 and 3,000 refugees stuck on the border in mud and rain when the gates were opened.

An empty field littered with some of the refugees' belongings showed that they were desperate to get on the move again. Stuffed toys, a milk bottle, a child's rubber boot, crayons scattered in the mud and soaked blankets were among the items left behind.

The road leading from Serbia into Croatia testified to the treacherous conditions the refugees have endured since Croatian police stalled the flow here. Ankle-deep mud is everywhere, and there were pools of water inside the tents next to blankets where refugees were sitting hoping for some cover.

Cleaners went in after the refugees left, preparing the site for the next wave of asylum seekers expected to arrive soon.

Already, dozens were seen walking up the road, some just wearing sandals and slippers with no socks and carrying children on their backs to avoid the mud. The rain has briefly stopped, but the clouds were still hanging low.

Earlier, Croatia sent at least two trains and several buses filled with people fleeing war and poverty north to the border with Slovenia, where officials accused the Croats of breaking previous agreements to limit such transfers to 2,500 people a day.

Croatian officials insisted no such binding deal could be enforced because they lacked legal powers to confine travelers to Croatian emergency shelters.

Sunjic earlier told The Associated Press that UNHCR estimates there are more than 10,000 refugees in Serbia which represents more than double the daily average in the past month.
Last Update: Oct 20, 2015 12:47 pm