Russia’s air attacks in Syria create risk of ‘an incident getting out of control’, says NATO 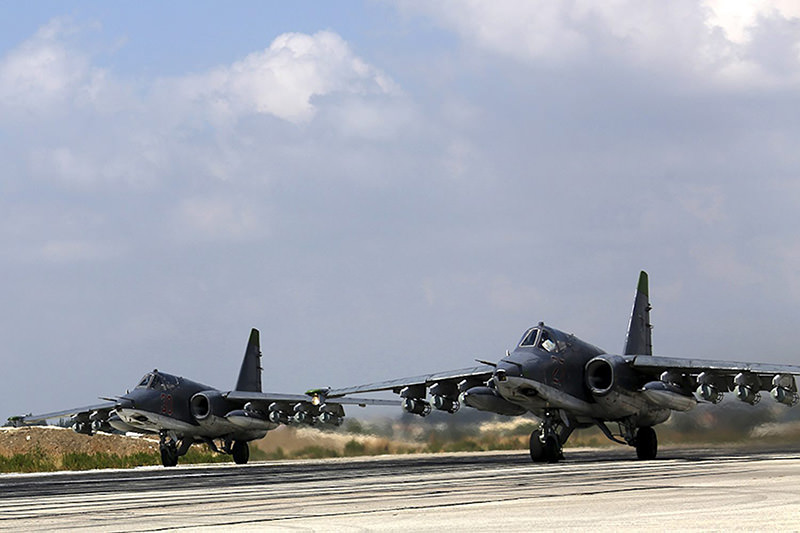 Two Russian SU-25 strike fighters taking off from the Syrian Hmeymim airbase, outside Latakia, Syria (EPA photo).
by Daily Sabah with AFP Oct 20, 2015 12:00 am
NATO voiced concern Tuesday that Russia's air attacks in Syria create the risk of "an incident getting out of control," as Moscow and the US-led international coalition pursue different military objectives in the country.

"It's clear that Russian objectives and their air operations over Syria and those of the anti-ISIS coalition are not the same," said NATO Deputy Secretary General Alexander Vershbow.

"So that does increase the risks of an incident getting out of control," he told reporters in Lisbon on the margins of a defence industry forum.

Moscow began air strikes in Syria last month in cooperation with the government in Damascus and says it is targeting the ISIS group and other "terrorists".

But the United States -- which is leading a separate bombing campaign in coordination with other Western and Middle Eastern states -- has accused Russia of chiefly targeting moderate opposition groups battling President Bashar al-Assad.

Russian air strikes in Syria have killed 370 people since they began on September 30, around a third of them civilians, a monitoring group said Tuesday.

The Syrian Observatory for Human Rights said 243 opposition fighters had been killed, among them 52 from the ISIS group, along with 127 civilians.

Vershbow said NATO members would be discussing in the weeks ahead "whether there is any additional measures or precautions that allies should take to ensure that there's no challenge to the integrity of the Turkish borders."

Turkey is one of the countries that has bridled at Russia's efforts to prop up the Assad regime. It has accused Russian aircraft operating in Syria of violating its air space twice, with Moscow blaming poor weather.

A drone downed by Turkey near the Syrian border was Russian-made, PM Ahmet Davutoğlu said Monday, adding that it could have belonged to one of Syria's various armed groups.

The Russian ambassador was summoned to the Turkish Foreign Ministry earlier this month, and was told that Turkish and Russian officials can hold a meeting in Ankara to prevent further airspace violations from happening in the future.

Accordingly, a high-level delegation from the Russian air force and senior Turkish military officials held a meeting a week later in Ankara regarding the air space violations, during which measures that Russia was taking to avoid further incidents were discussed.
Last Update: Oct 20, 2015 6:15 pm
RELATED TOPICS