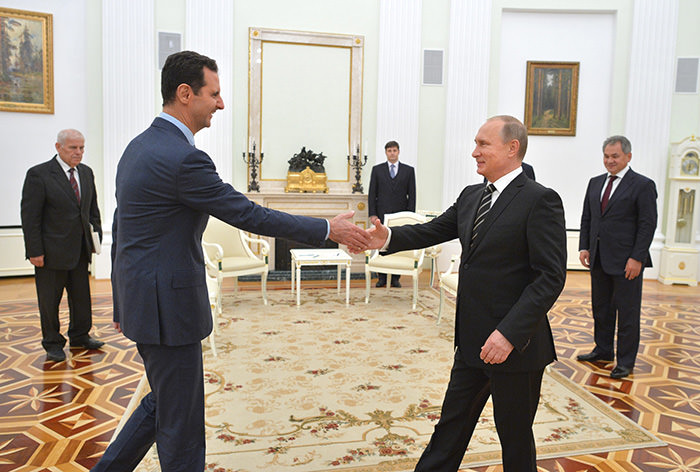 Russian President Vladimir Putin (Right) shaking hands with Syrian President Bashar al-Assad during their meeting at the Kremlin in Moscow, Russia, 20 October 2015 (EPA Photo)
by Anadolu Agency
Oct 21, 2015 12:00 am
The U.K.-based Syrian Observatory for Human Rights (SOHR) on Wednesday said that Russian airstrikes carried out in Syria had killed 370 people over the last 20 days.

According to the SOHR, the death toll includes 127 civilians, of whom 36 were children and 34 women, along with 243 fighters from militant groups such as the Nusra Front and ISIS.

The group went on to assert that the Syrian regime had conducted close to 40,000 airstrikes across Syria -- and dropped more than 21,000 barrel bombs -- since October of last year.

According to the SOHR, 6,317 civilians have been killed by regime airstrikes -- including 899 women and 1,334 children -- over the same period.

Barrel bombs are improvised containers packed with shrapnel and explosives. Usually dropped from army helicopters, they are believed to have killed thousands of Syrians since the conflict began in early 2011.

Turkey and several western countries, for their part, accuse Russia of targeting moderate groups in Syria opposed to Assad, many of which are supported by Ankara and Washington.

At least 250,000 people have been killed since the Syria conflict began in 2011, according to UN figures, with 7.6 million internally displaced and over four million having fled to nearby countries.
Last Update: Oct 21, 2015 4:21 pm