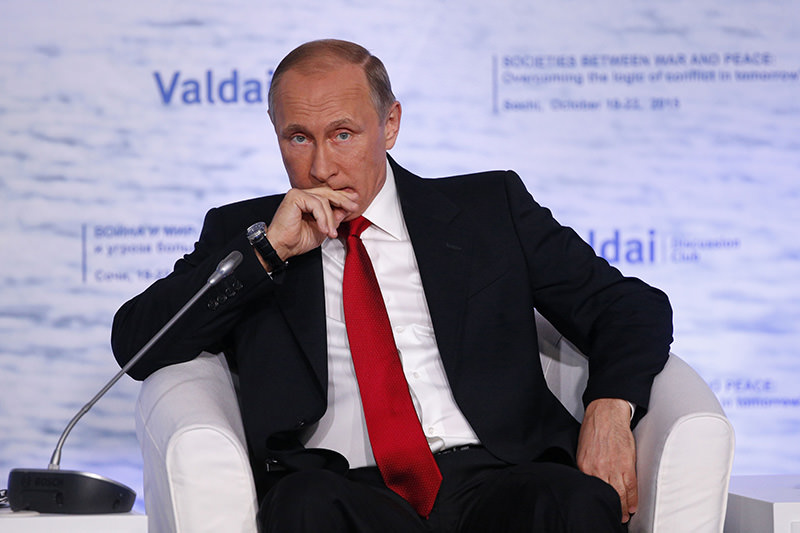 Delivering a keynote speech to political and business leaders at the annual Valdai International Discussion Club, Putin said Russia is close to exchanging data about the positions of Islamic State of Iraq and al-Sham (ISIS) militants in Syria with Western countries, something Moscow has wanted for weeks.

Labeling opposition groups fighting against Syrian President Bashar Assad's regime "terrorists," he said the terrorists should not be separated by using the term moderate since the difference between them is unclear.

He accused the West of playing a "double game" with terrorist groups in Syria, saying: "It is always difficult to play a double game, declaring a fight against terrorists and simultaneously trying to use some to place pieces on the Middle Eastern chess board to pursue their own interests."
The latest rapprochement between Kurdish groups in Syria, namely the PKK-affiliated Democratic Union Party (PYD) and its armed People's Protection Units (YPG), and Moscow is important.

Reportedly, a Kurdish delegation led by PYD Co-Chair Asia Abdullah paid a visit to the Russian capital Thursday. "There are positive signals about the establishment of a representative office in Moscow. Hopefully it will open soon," an official said after the meeting.

Russia's Kommersant newspaper reported on Tuesday that the PYD plans to open a mission in Moscow. The purpose of the mission is to strengthen cooperation with Moscow in fighting the Islamic State of Iraq and al-Sham (ISIS), the newspaper said.

Yet, Oytun Orhan, an expert on the Middle East at Ankara-based think tank Center for Middle Eastern Strategic Studies (ORSAM), said even the Russians are an alternative ally for the YPG due to its pragmatic attitude toward all the actors in Syria since the beginning of civil war, although the U.S.'s support is more crucial, especially considering its air cover in the fight against ISIS.

"They have not put all their eggs in one basket since the outbreak of the crisis. They would not fully compromise in Putin's offer regarding the alliance with the regime and seek the balance they had with the opposition," he said.

According to reports published in early October, the Pentagon had planned to arm 20,000 YPG fighters to help in the fight against ISIS in Raqqa.
Having acquired around 50 tons of ammunition from the U.S. as part of a plan to launch an attack on Raqqa, the ISIS capital, it is now unclear if the YPG will participate.

A Pentagon official reportedly said Wednesday that the U.S. at this moment is unsure whether Kurdish fighters will join the operation on Raqqa. "As far as pressure on Raqqa, you know, this is why our partnership with Syrian Arabs is so vital, because Syrian Arabs really have the ability to pressure Raqqa heavily. Whether or not Kurdish fighters are willing to move that far south, frankly, is an unknown at this point," Colonel Steve Warren said.

Orhan also said that YPG will resist the U.S.'s plan to counter ISIS because Raqqa has no strategic meaning for them. "Firstly, there is an inconsistency of interests here, contrary to Kobani and Tal Abyad. Secondly, there will be an offensive war rather than the defensive ones that have been witnessed so far. The likelihood of success in such an operation is low," he said.
Last Update: Oct 23, 2015 4:42 pm
RELATED TOPICS