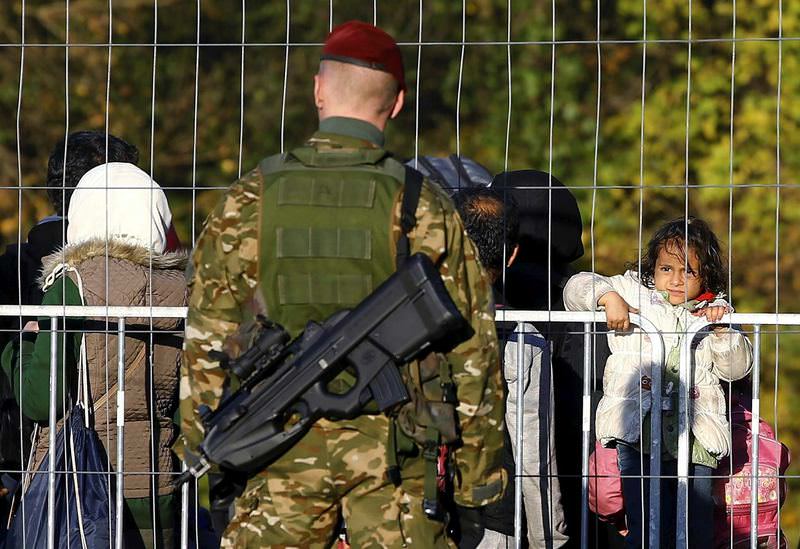 A member of the Slovenian army observes migrants walking towards the Austrian border near the village of Sentilj, Slovenia.
by Daily Sabah with Wires Oct 26, 2015 12:00 am

Ahead of EU talks aimed toward formulating an action plan to solve the Syrian crisis, several countries said they would close their borders unless a solution is found soon. Meanwhile, for exhausted refugees, falling temperatures and worsening weather conditions are adding to their difficulties

European leaders traded threats and reprimands on Saturday as thousands more migrants and refugees streamed into the Balkans on the eve of European Union talks aimed at agreeing on urgent action to tackle the crisis.

Concern is growing about hundreds of thousands of migrants arriving in Europe, many from war zones in the Middle East, and camping in western Balkan countries in ever colder conditions as winter approaches. More than 680,000 migrants and refugees have crossed to Europe by sea so far this year, fleeing war and poverty in the Middle East, Africa and Asia, according to the International Organization for Migration.

Bulgaria, Serbia and Romania said they would close their borders if Germany or other countries shut the door on refugees, warning they would not let the Balkan region become a "buffer zone" for stranded migrants. "The three countries, we are standing ready, if Germany and Austria close their borders, not to allow our countries to become buffer zones. We will be ready to close borders," Bulgarian Prime Minister Boiko Borisov told reporters.

European Commission president Jean-Claude Juncker has invited the leaders of Austria, Bulgaria, Croatia, Macedonia, Germany, Greece, Hungary, Romania, Serbia and Slovenia to Sunday's mini-summit. The aim of the meeting is to agree "common operational conclusions which could be immediately implemented."

Slovenia, which said on Friday it would consider putting up a fence on its border with Croatia unless a solution is found soon, said the EU "must ease the burden on the most exposed countries." It called for "EU action that would stop the uncontrolled migration flows on the outer borders of the EU."

Almost all the migrants are entering the EU via its poorer members in south-eastern Europe and heading north to seek asylum in countries including Germany, Sweden and the Netherlands. Leaders of the richer Western states worry that large-scale immigration will boost support for the xenophobic far-right.

Dutch Prime Minister Mark Rutte said Eastern European countries owe it to their partners to do more to stem the inflow, and demanded a fairer distribution of asylum seekers among member states. "Eastern Europe has done too little to resist the refugee stream," told public television on Saturday. "We have invested a huge amount in them, and now they are doing too little."

The EU's eastern members have resisted calls for refugees to be divided between the bloc's 28 members. Hungary's Prime Minister Viktor Orban has erected a fence along his country's southern frontier, effectively handing the problem on to neighboring Croatia and Slovenia.

Chancellor Angela Merkel has said Germany must prepare to receive as many as 800,000 refugees this year, despite opposition from some of her governmental allies. Juncker praised Merkel for ignoring public opinion in her efforts to tackle the refugee crisis, which she describes as a bigger challenge for Europe than Greece's debt woes. "This isn't about short-term popularity but about substance," he told German media group Funke.

For exhausted refugees and migrants making their way across the continent, falling temperatures and worsening weather are adding to their difficulties. "We want to go to the Netherlands. I just want this ordeal to stop," said Hamrein, 20, from Syria, as she held her feverish six-month-old son near the Slovenian village of Rigonce. She was among about 2,000 migrants and refugees waiting in a muddy field waiting to cross to a nearby camp. Many lit fires and wrapped themselves in blankets as early morning temperatures sank close to zero.

With winter looming, Amnesty International warned on Saturday of a humanitarian disaster if migrants are left stranded at borders. "Every day counts," Juncker told Bild. Without action, "we will soon witness families dying wretchedly in chilly rivers in the Balkans."

"The only goal of this long journey is to flee the disgusting war so we can start a safe life," Shaker Abara, 37, from the Syrian town of Homs told AFP at the Berkasovo border area as he was waiting to cross from Serbia into Croatia in chilly temperatures early on Sunday. More than 4,000 people arrived there overnight in less than 12 hours, police said. Since last week's backlogs, when thousands of refugees spent nights in the open air defying heavy rain and freezing temperatures, the situation has improved as the authorities of the two countries agreed to process refugees in a quicker manner. "The most difficult part was when we left Turkey on a rubber boat. There were 38 people onboard, including a lot of women and children. Luckily, we safely reached Greece. Now we are in Europe and we already feel safe somehow," Abara said.

The turmoil in the Middle East and the five-year war in Syria have led many people to flee the conflict in an attempt to seek security and shelter in a more prosperous and peaceful country, such as a European one. More than 680,000 people mainly fleeing conflict in Syria, Iraq and Afghanistan have flooded Europe so far this year, in the biggest movement of its kind since World War II. Most are traveling through Turkey, Greece and the western Balkans, seeking new lives in Germany and other northern EU states, creating a huge strain on those countries. The U.N. refugee agency encouraged European countries to do more to share the burden of the international community in the migrant crisis.
RELATED TOPICS