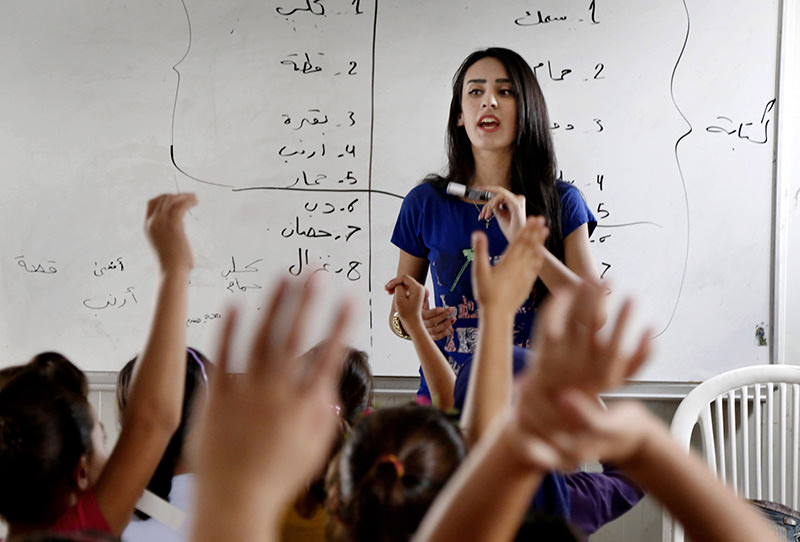 The young Syrian refugees at the Kawergosk refugee camp in northern Iraq have already lost so much and now they're losing their teachers.

One after another, school teachers have packed up and left for Europe searching for opportunity, safety and a better life.

With the school year just kicking off in Iraq, schools like this one are scrambling to accommodate the refugee students left behind. Nine of Kawergosk's teachers fled to Europe this summer and the remaining teachers are doubling up on students.

Mizgeen Hussein, 28, is among those teachers left behind. A refugee from Derik, Syria, Hussein admits that despite her commitment to the students, she would leave if she had the money.

"The reason for me to leave is to have a future", said Hussein, who teaches a class of 37 children at the camp's school. "For sure this has an effect on us," she added. "For now, we'll solve it with the people who are here until they will bring other teachers."

Camps across Iraq are experiencing the same exodus of teachers heading to Europe. Meanwhile student numbers are on the rise as fighting continues to tear through Syria and Iraq, forcing people to flee their homes. An increasingly chaotic civil war has gripped Syria for nearly five years, and the ISIS has claimed territory in a third of both Iraq and Syria.

Four of the 21 teachers at the Kobani primary school in Domiz camp have left in the past month. With over 1,000 students, manager Abdullah Mohammed Saeed said the school's future is in jeopardy.

"We need new people, otherwise we have to close the school," he said.

"Our problem is that now our teachers are escaping to Europe," said Mazhar Mohammed, Kawergosk's principal. "We don't have any other problems. The government is providing us with enough books."

Iraq's semi-autonomous northern region hosts approximately 250,000 Syrian refugees, with more than a third of them living in camps. Many have found work, opened shops and pursued some form of education. But their uncertain future has caused those in doubt to flee the region, either back to Syria or across the border to Turkey and beyond.

According to the U.N. refugee agency, the number of Syrians leaving northern Iraq for Europe has tripled in recent months. Among them are many Syrian teachers who have been getting paid by the Kurdish regional government to teach at the various camps. But the region is facing a severe financial crisis, and many teachers have not received salaries -- another reason to leave.

On the first day of school at Kawergosk, children gripped the school's fence waiting for the gates to open. Hundreds flooded into the schoolyard, anxious to get back into their classrooms.

The lessons are shortened, as there are not enough teachers to handle all the students. "We dropped the last lessons, so we send the students home earlier," Mohammed, the camp principal, said. The lack of teachers has forced many instructors to give lessons in areas outside their specializations, with history teachers covering geography and math teachers expanding into physics.

Some teachers, like Jeveen Salah Omer, have nevertheless vowed to stay, whatever the cost.

"The education of students is more important than anything," she said. "They became refugees and had to come here. This is the least we can do for them."
Last Update: Oct 26, 2015 12:34 pm
RELATED TOPICS