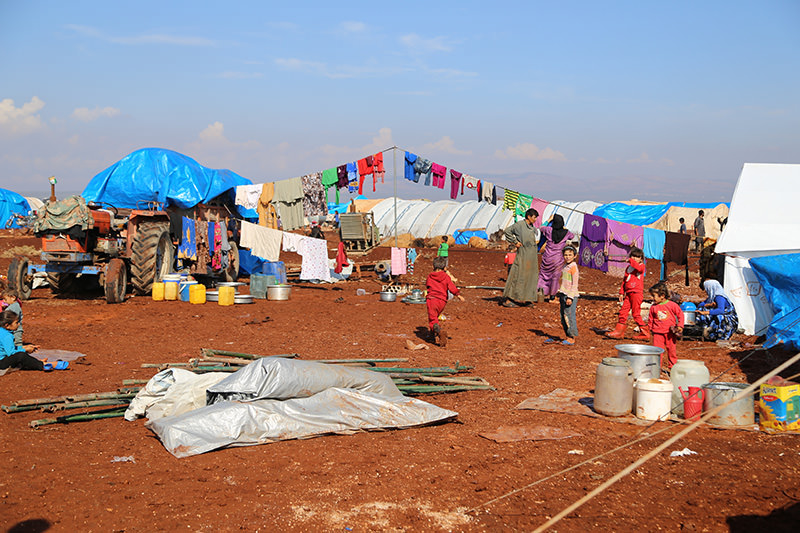 by Anadolu Agency Oct 26, 2015 12:00 am
Tens of thousands of Syrians are fleeing Russian airstrikes as warplanes target civilian areas.

At the Atmeh refugee camp on the Syrian-Turkish an increasing number of refugees from Hama, Homs, Idlib and Aleppo provinces have arrived since Russia began airstrikes on Sept. 30.

"Russian planes have been bombarding residential areas, civilians and children day and night," Abdulkarim al Ahmed, from southern Aleppo, told Anadolu Agency. "We had no choice but to run away when our house was demolished."

Most of the refugees come from areas where President Bashar al-Assad's forces are facing opposition groups. Ahmed said ground held by the rebels was being targeted in particular.

Since Russia began launching airstrikes it has claimed it is only going after "terrorists", primarily ISIS. However, members of the anti-ISIS military alliance, including Turkey, say civilians and moderate opposition forces fighting the regime are bearing the brunt of the strikes.

"We would like the Muslim world to get together and raise its voice against these massacres," Ahmed said.

"What harm can the civilians give the administration and Russian army? We have no affiliation whatsoever with Daesh yet we are bombarded every single day."

He said his family's only refuge was the Turkish border. "We feel safe here."

Another new arrival, Ahmed Abu Saleh, said tens of thousands had left their homes -- a claim backed by relief agencies who say an escalation in violence since Russia joined the war is threatening one of the worst humanitarian crises in the last four years.

"Clashes have intensified in Aleppo and other cities with the help of Russian airstrikes," Saleh said. "Around 20,000 people have left their homes over the past seven days and settled in tent camps along the border."

He added: "We came here with about 300 other families. We were afraid of being bombed on the way, as they drop barrel bombs on those who flee."

Russian air attacks in northern Homs on Oct. 15 killed at least 59 civilians, including 33 children, according to a Human Rights Watch (HRW) statement released Sunday that cited emergency workers and activists.

The group said such attacks constituted "serious violations of the laws of war".

The strikes were a part of a broader air campaign by Russia on an enclave under the control of Syrian opposition groups to assist a ground offensive by the regime's forces and its allies.

"Civilians in northern Homs may have nowhere to hide or flee as the offensive intensifies," Nadim Houry, HRW's deputy Middle East director.

"Russia should ensure that it takes all precautions to protect civilians and that civilians are able to leave the area if they want, without being hit by Russian or Syrian air strikes."

The rights group said no warnings or announcements were made to civilians prior to the Oct. 15 attacks although the laws of war require advance warning of attacks that may affect civilians.

It was not the first time Russian forces have faced allegations of striking civilians. The Syrian-American Medical Society said Russian airstrikes hit nine hospitals in Syria in October, killing and wounding staff and civilians.

Speaking to journalists at a teleconference Monday, he said: "A lot of false stories were published over the recent weeks regarding the civilian deaths in Russia's air operations in Syria."

He said the stories were deliberately planted.

Russia's first priority in choosing targets was to avoid harming the civilian population, he added, pointing out that terrorists were hiding in residential areas as they knew Russian warplanes would not target those locations.

According to the Syrian Observatory for Human Rights, Russian air attacks have killed at least 127 civilians, including 36 children, since Sept 30.

"Russia talks about precision strikes, yet accounts from the ground and footage from the aftermath indicate that many civilians are being killed," Houry said. "Russia needs to take all necessary measures to protect civilians from their own strikes."
Last Update: Oct 26, 2015 11:24 pm
RELATED TOPICS