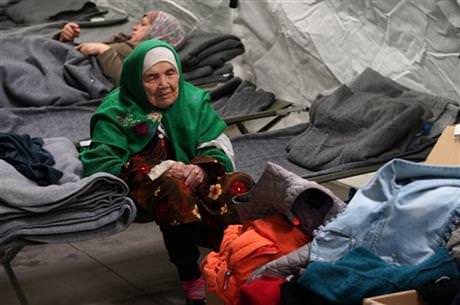 105-year old Afghan woman. Bibihal Uzbeki from Kunduz, Afghanistan, rests in Croatia's main refugee camp at Opatovac, Croatia, near the border with Serbia, Tuesday, Oct. 27, 2015. (AP Photo)
by Associated Press Oct 27, 2015 12:00 am
She is 105 years old but still dreams of a better life without wars and bombs.

Bibihal Uzbeki, from Kunduz, Afghanistan, is among tens of thousands of refugees who have traveled for thousands of miles fleeing war and poverty to search for a happier, safer future in Europe.

Wrapped in a green scarf and a brown blanket, she was brought on a stretcher to Croatia's main Opatovac refugee camp Tuesday after crossing in from Serbia with a large group of refugees, including her son, grandson and several other relatives.

The trek across mountains, deserts, seas and forests into Europe is dangerous and exhausting, even for people one-fifth her age.

"My legs hurt, but I'm fine," Uzbeki said in Farsi, speaking through a translator while sitting on the floor inside a Red Cross tent. Her hands shook as she spoke.

She said her 17-member family had traveled for 20 days to reach Europe, with her 67-year-old son and her 19-year-old grandson often carrying her on their backs.

"We had problems many times. I suffered a lot," she said. "I fell and injured my head. I have scars on my head."

As they carried her into a train that took them further west toward Slovenia, her grandson Muhamet said the family hopes its final destination is Sweden.

Croatian police said they checked her documents and she is 105 years old. Her grandson also said that's her age, but it could not be independently verified.

The Croatian Red Cross wished the family "all the luck in the world, as well as to thousands of others whom we meet daily."

More than 260,000 refugees have passed through Croatia since Sept. 15, when Hungary closed its border with Serbia, diverting the flow of refugees to Croatia.