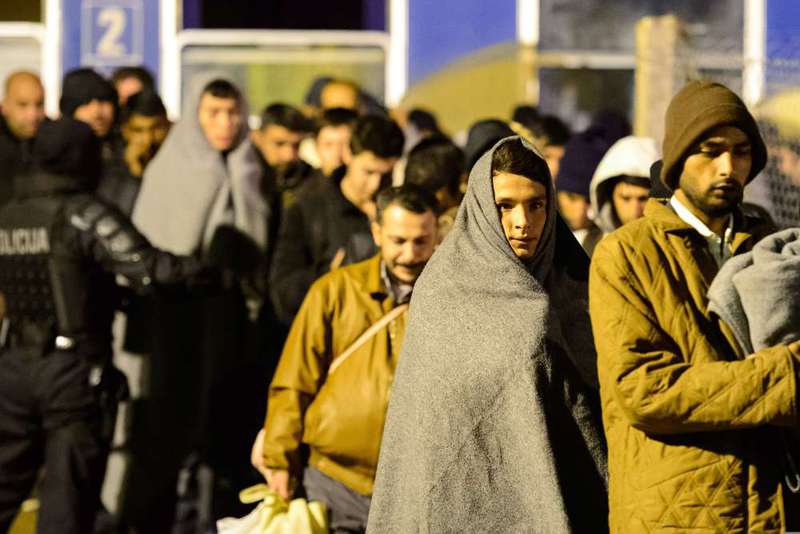 Migrants keep warm using blankets as they walk toward a refugee center in Sentilj, after arriving by train.
by Daily Sabah with Wires Nov 06, 2015 12:00 am

The EU announced it expects 3 million more refugees to arrive in the 28-nation bloc by the end of 2016. The U.N. also warned that the number is increasing and harsh winter conditions are likely to exacerbate the suffering of the thousands of migrants

The European Union is predicting that 3 million more migrants could arrive in the 28-nation bloc by the end of next year, with the refugee emergency already imposing a stern test on the EU's capacity to provide shelter. More than 700,000 people have come to Europe seeking sanctuary or jobs so far this year, overwhelming reception centers and border authorities.

EU autumn economic forecasts released on Thursday show that based on current migrant entries and a "technical assumption" about future flows, arrival rates are unlikely to slow before 2017. The EU's executive commission said that "overall, an additional 3 million people are expected to arrive in the EU over the forecast period."

The commission says the refugee crisis has resulted in additional government spending but that it could have a small but positive impact on European economies within a few years.

However the EU said the real impact on national budgets is difficult to predict, given a lack of complete and reliable data about exactly who is arriving in the bloc and whether they are staying. Most people are arriving in Europe through Italy and Greece, while Hungary and Austria have been affected by heavy migrant flows. Germany and Sweden are also feeling the impact. Germany registered more than 758,000 asylum seekers from January to October this year, the Interior Ministry said yesterday. Those nations, among others, want the EU to apply its budget rules with flexibility, taking into account Europe's biggest refugee emergency in well over half a century, and avoid reprimanding member states for excessive spending and deficits.

Meanwhile, the United Nations also said yesterday that up to 600,000 migrants and refugees are expected to cross from Turkey to Greece and onwards over the next four months, with the flow of people set to persist through the winter. "Between November 2015 and February 2016, UNHCR anticipates that there could be an average of 5,000 arrivals per day from Turkey, resulting in up to a total of 600,000 arrivals in Croatia, Greece, Serbia, Slovenia and the former Yugoslav Republic of Macedonia," the U.N. refugee agency said in a planning document. "Harsh weather conditions in the region are likely to exacerbate the suffering of the thousands of refugees and migrants landing in Greece and traveling through the Balkans, and may result in further loss of life if adequate measures are not taken urgently," the U.N. High Commissioner for Refugees (UNHCR) said, issuing its new winter plan.

"If we don't take the necessary action, we fear that more people will die because ... of the harsh conditions of winter in Europe. We have already seen a number of shipwrecks off Greece and we are afraid that people might also die from exposure on the way between Greece and central and northern Europe," William Spindler, spokesman for the U.N. High Commissioner for Refugees (UNHCR), told Reuters Television.

Spindler criticised the failure of the European Union's member states to agree a comprehensive response. "Europe has the means to deal with this situation but is not dealing with it," he said. "And now, aid agencies such as UNHCR and others are having to come to Europe to respond." The fresh funds will be used to upgrade shelter and reception facilities for winter conditions, and to supply family tents and housing units equipped with heating.

The agency is seeking an additional $96.15 million to support Croatia, Greece, Serbia, Slovenia and the former Republic of Macedonia, bringing its emergency funding needs for Europe's refugee crisis to $172.7 million.

The turmoil in the Middle East and the five-year war in Syria have led many people to flee the conflict in an attempt to seek security and shelter in a more prosperous and peaceful country, such as one in Europe. However, Europe has been slammed for lacking a collaborative response to the crisis. The U.N. refugee agency encouraged European countries to do more to share the burden of the international community in the refugee crisis.
RELATED TOPICS