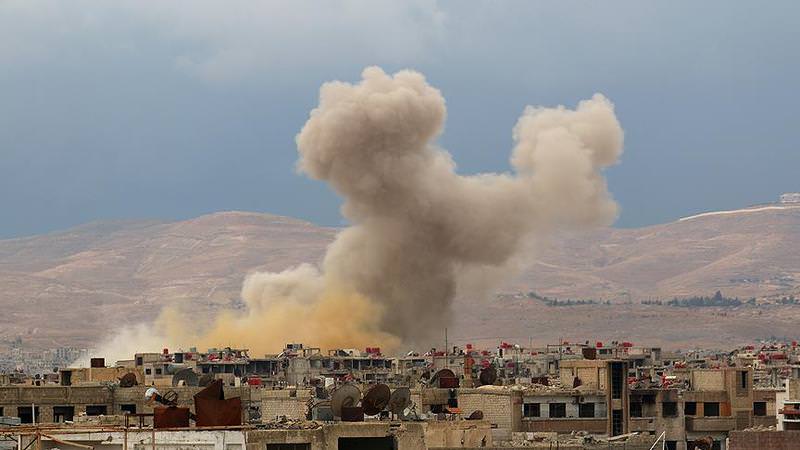 by Mehmet Çelik Nov 19, 2015 12:00 am
The Syrian regime intensified and expanded its ground operations on Thursday in the Bayırbucak Turkmen area, which began three days ago in Latakia.

Regime forces expanded their operations with the support of Russian airstrikes and conducted simultaneous attacks on the Fırınlık, Acısı, and Avanlı regions in the Turkmen Mountain area, which are under the control of moderate opposition forces, witnesses told Anadolu Agency.

The attacks reportedly targeted Turkmen villages and Turkmen positions. Bombs were also seen from areas close to the Turkish side of the border.

There have been reports of many casualties from the attacks, while the sound of explosions coming from the region were heard in the border town of Yayladağı in Turkey's Hatay province.

Prime Minister Ahmet Davutoğlu condemned the attacks on Friday. Speaking to reporters in Ankara, "Bayırbucak Turkmens have been living in that region for many centuries. We condemn the attacks. No one can legitimize the attacks against the Arab and Turkmen populations in the region," Davutoğlu said. He also said that the Russian ambassador was summoned over the attacks on Turkmen areas in Syria.

Regime troops launched a ground offensive into the southern villages of Gimam three days ago.

Speaking to Daily Sabah, Tarık Sulo, vice chairman of the Syrian Turkmen National Movement Party, criticized some media outlets that reported that the attacks are not targeting civilians or Turkmens.

"The severity and danger of the attacks on Turkmen Mountain can even be seen from Turkey's Yayladağı district [in Hatay]. If they do not believe that, we can also take them to the Turkmen Mountain region," Sulo said.

"Here, the danger and severity of the sorties are a matter of concern. While previously there were two or three sorties, now this number has increased to hundreds of sorties by Russian and Assad regime airstrikes," he added.

Sulo stressed the significance of the strategy behind the attacks: "During the G20 Leaders Summit, there were important decisions against Assad. Assad wants to capture new areas and move forward to counter-attack these decisions. Moreover, Assad moves into areas cleared of DAESH terrorists along Turkey's Syrian border, which is, in a way, another counter-attack against the plans to create a safe-zone on the Turkish border."

Sulo added that, geopolitically, the Turkmen Mountain region is of importance for Assad's ambition to widen Alawaite influence, as well as the Democratic Union Party's (PYD) aim to open up to the Mediterranean Sea. "The attacks are worrisome for the future of the Turkmen population in the area," he said.

Sabah daily columnist Hilal Kaplan wrote in her column on Thursday: "Since yesterday, we have been receiving disastrous news from the Turkmen Mountain region, which has 27 Turkmen villages. There are concerns about the lives of more than 80,000 Turkmens. Russia has been shooting indiscriminately. Sebbiha militias and their affiliates are moving forward. The last Turkmen homeland in Syria is being invaded."

Kaplan added that despite the humanitarian disaster and invasion by the Assad and Russian forces, the international community and media continues to ignore the situation. She added: "In the coming days, the Syrian Democratic Forces, joined by the YPG [People's Protection Unit] and Assad forces, will attempt to conduct attacks on Jarablus and execute demographic engineering by exiling the Turkmen population in that region," and that there must steps taken to stop the attacks.

Russia on Wednesday had also started bombing Raqqa, DAESH's self-proclaimed capital, with the aim of punishing the terrorist organization for downing a Russian jetliner over Egypt, which killed all 224 people onboard. Russian President Vladimir Putin on Tuesday ordered the Russian missile cruiser Moskva, currently in the Mediterranean, to start cooperating with the French military in operations in Syria, which had started a heavy intensive following the deadly attack in Paris.

However, activists on social media claimed that the airstrikes were targeting civilians as well since DAESH was using civilian areas to hide. Reportedly, Russia also bombed Idlib and Aleppo where dozens of civilians died in the last two days. Activists warned that a new wave of refugees cold occur unless the attacks distinguish militants from civilians.