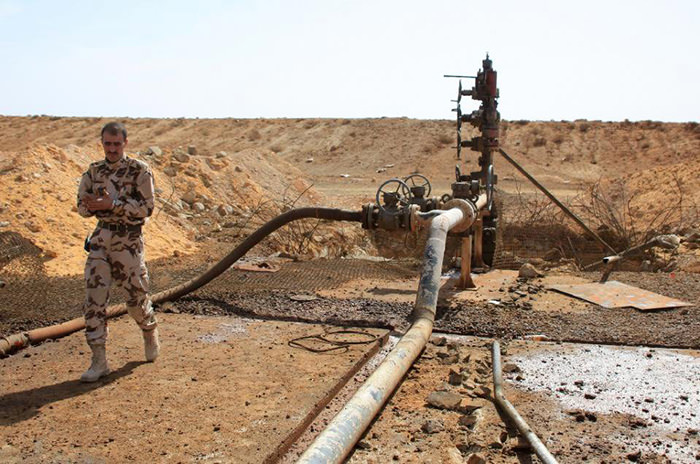 |File Photo
by Anadolu Agency Dec 02, 2015 12:00 am
The regime of Syria's Bashar al-Assad is buying oil from Daesh to fulfill its energy needs as the war approaches its fifth anniversary, according to authorities including the U.S. and German governments.

Since civil war erupted in Syria more than four-and-a-half years ago, oil production in the country has slumped dramatically, from around 385,000 barrels a day in early 2011 to around 10,000 barrels as of last year, according to the Syrian Oil Ministry.

During that time, many of the country's most productive regions have fallen into the hands of Daesh -- providing the extremists with their most valuable source of income.

Much of this oil is being sold to Assad's regime, despite the government's claim to be involved in a life-or-death fight with the group.

On Tuesday, the German government aired its concerns about the Syrian government's oil deals with Daesh.

Responding to a question about Russian President Vladimir Putin's claim that Turkey buys oil from Daesh, Foreign Ministry spokeswoman Sawsan Chebli said Germany had no evidence of such trade.

"But what we know, for example, is that the Assad regime has received large amounts of oil from ISIL," she said, using an alternative acronym for the terrorist group. "We have evidence. We have indications showing that this is the case."

Adding to the evidence of an Assad-Daesh oil link was last week's decision by the U.S. Treasury to impose sanctions on four individuals and six businesses that it accused of providing support to the government of Syria and facilitating Daesh oil sales.

The Treasury's Office of Foreign Assets Control named George Haswani, a Syrian-Russian businessman, as a middleman for oil deals between the Syrian regime and Daesh. His company HESCO Engineering and Construction was also subjected to sanctions.

The U.S. said Haswani was "materially assisting and acting for or on behalf of the government of Syria" and described HESCO as a "Syrian engineering and construction company that operates energy production facilities in Syria, reportedly in areas controlled by Daesh."

In March, Haswani was added to the EU's sanctions list, when he denied trading in Daesh oil for the Syrian government.

Mudalal Khuri, a businessman with a "long association with the Assad regime" who "represents regime business and financial interests in Russia", was also blacklisted alongside five businesses linked to him.

Another Russian businessman, Kirsan Ilyumzhinov, was also listed. He is a former president of the Russian Republic of Kalmykia and the World Chess Federation president and has numerous commercial links with Khuri.

Alongside Khuri, he is a major shareholder in the Russian Financial Alliance Bank, which has been allegedly used to help the Syrian regime dodge sanctions.

"Kirsan Ilyumzhinov was designated today for materially assisting and acting for or on behalf of the government of Syria," the Treasury statement said.

The EU imposed sanctions on Syria, including its oil industry, as early as 2011 -- two years before Daesh gained control of oil fields. Since the outbreak of the conflict, the Syrian Oil Ministry has reported around $23 billion in revenue lost due to the fall in oil production.

Syria's most productive fields around Deir ez-Zor and Al-Hasakah in eastern Syria came under Daesh control relatively early in the conflict.

Near the Iraqi border, al-Omar oil field, the largest in Syria, and the Tanak oil field and the Shaer gas field fell to Daesh last year. The Jahar gas field in central Homs province was seized by Daesh last winter.

According to an October report in the Financial Times, crude production in Daesh-held territory is between 34,000 and 40,000 barrels a day.

Citing estimates by local traders and engineers, the London-based newspaper said oil is sold for between $20 and $45 a barrel, earning the militants an average of $1.5 million a day.

The U.S. claims to have cut the extremists' oil production by 30 percent in recent weeks.

Sanctions imposed by the EU Council in September 2011 have since been updated and, as of May 2015, applied to more than 200 individuals and 70 entities.

The sanctions, which include an import ban on crude oil and petroleum products from Syria and a ban on investment in the Syrian oil industry, are in place until June 2016.

This week, Putin claimed Turkey was benefiting in the oil trade with Daesh, an accusation strongly denied by Turkish officials, including President Recep Tayyip Erdoğan.

The president challenged Putin, telling his Russian opposite that he would resign if the claim was proved and calling on Putin to do the same if no evidence was forthcoming.

The allegation stemmed from last week's shooting down of a Russian military jet on the Turkey-Syria border by the Turkish Air Force.

On Tuesday, Putin's spokesman Dmitry Peskov said Russia had proof but would not release it.

"We do not see such accusations without any evidence as helpful," Seibert told a news conference in Berlin. "We believe that the international community should focus on strengthening the fight against ISIL and refrain from everything that can strengthen ISIL."
Last Update: Dec 02, 2015 3:11 pm
RELATED TOPICS