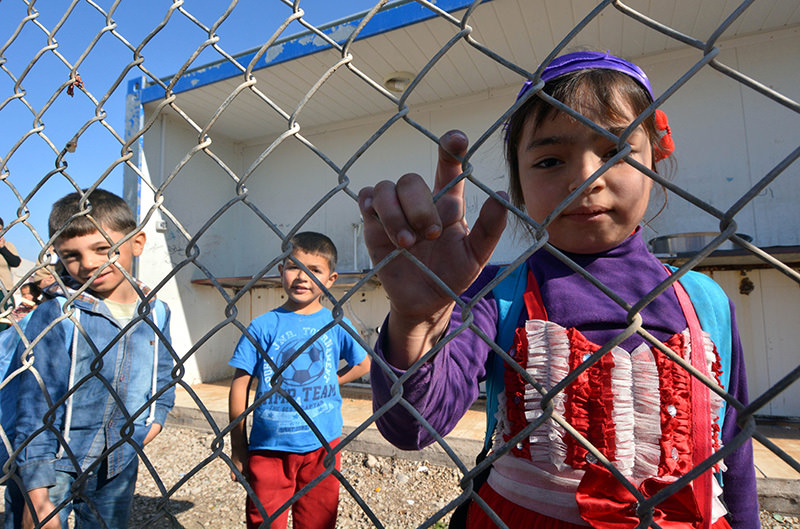 by Anadolu Agency Dec 02, 2015 12:00 am
Syrian Turkmen who have fled their homes amid Russian and government aerial bombardments have described their homes as "wrecks".

Areas in Syria's Turkmen region of Bayırbucak have seen airstrikes from the regime of Bashar al-Assad with Russian support.

Thousands of Turkmen, a Turkic ethnic group, have been displaced by the fighting around Bayırbucak. Around 2,000 have recently sought shelter in Turkey.

Many Turkmens who left their villages are trying to live in and around Yamadi village near the Turkish border in makeshift tents.

Speaking to Anadolu Agency, one Turkmen, Hani Hamis, said that their villages had been turned into ruins and that he barely escaped with his child and pregnant wife's lives.

Hamis said Russian jets bombed the Turkmen region on the pretext of a Daesh presence there.

"All regions that they hit are places where civilians live. Our homes were turned into wrecks. Our children died," Hamis said.

"We are fighting for our lives with Turkey's support. May god bless Turkish people," he said.

Fatma Sara, another Turkmen, said that their journey to Turkey was very hard due to Assad regime and Russian attacks.

She said that the regime would bomb them again if they return to their villages.

"We will continue to repair the schools for our children's future, just to spite them," he added.

Turkey's official disaster relief agency, AFAD, has set up a coordination center in Yamadi to organize the distribution of humanitarian aid to affected Turkmen families.

Over the last several days, approximately 2,000 Syrian Turkmen, fleeing the violence in their home country, have reportedly arrived in southern Turkey.

Turkmen are a Turkic ethnic group based largely in Syria and Iraq, where they live alongside large Arab and Kurdish populations. The Turkmen community, which includes both Sunni and Shia Muslims, shares close cultural affinities with the Turkish people.
Last Update: Dec 02, 2015 3:15 pm
RELATED TOPICS