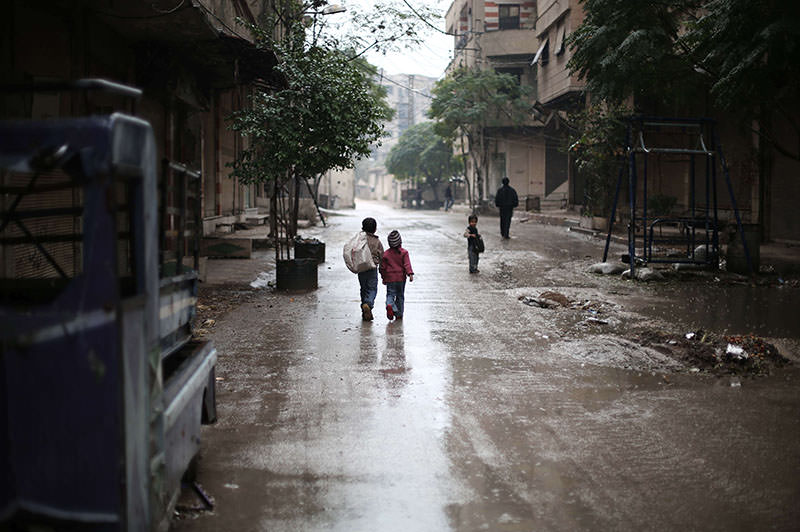 Syrian children walk in the rain in the town of Saqba, on the outskirts of the capital Damascus, on November 17, 2015 (AFP photo)
by Dec 06, 2015 12:00 am
Representatives from many of Syria's fragmented opposition groups, political and armed, will meet in the Saudi capital this week in a bid to find common ground ahead of potential negotiations with the regime of Bashar al-Assad.

Here are some of the factions and figures believed to have been invited:

The leading opposition grouping in exile, created in Doha in November 2012, will send 20 delegates to Riyadh.

It includes members from across the political and ethnic spectrum and represents some military forces, though it is often accused of being removed from the realities on the battlefield.

It has been recognised by 120 countries as the representative of the Syrian people and participated in two rounds of peace talks in Geneva with regime delegates in 2013 and 2014.

The Coalition believes the war must be resolved along the lines of a document produced by the so-called Geneva I conference among leading powers in 2012.

That called for a transitional government with full executive powers, which the Coalition says means Bashar al-Assad must step down.

It is currently headed by Khaled Khoja, and is based in Turkey.

Formed in January 2015, the grouping brings together some 150 domestic and exiled opposition figures, including Kurds.

One of the group's co-founders is Haytham Manaa, a longtime dissident, who told AFP it would send 20 delegates to the meeting.

The secular grouping of figures from across the political spectrum was represented in talks in Moscow and presents itself as an alternative to the National Coalition, though it has not been recognised as such.

It has staunchly opposed foreign intervention in Syria and its continued existence inside the country has been tolerated by the regime, though its members have been harassed and arrested.

It participated in talks organised by Moscow on the conflict in 2014 and 2015.

It was not yet clear if other domestic opposition groups like the Popular Front for Change and Liberation, and the Building the Syrian State party have been invited.

A handful of independent dissidents, including activists and businessmen may also figure among the participants, though their names have not been made public so far.

Some 15 representatives from armed factions are expected to attend the conference, according to one source, but the details of which groups are being invited remain murky.

The only group to confirm it has been invited is Jaish al-Islam, a powerful movement mostly active around Damascus, but the group has not said if it will attend.

The Western-backed Southern Front coalition, which operates in southern Syria, is thought to be another invitee, but has not said so officially.

There have also been reports that Ahrar al-Sham will be among the invitees.

The group has not commented officially on the reports and declined request for comment on the issue.

But Kurdish sources confirmed that the Kurdish People's Protection Units (YPG) has not been invited.

Neither has the Syrian Democratic Forces, a recently formed alliance of the YPG and smaller Arab and Christian militias.
Last Update: Feb 24, 2016 8:19 pm
RELATED TOPICS