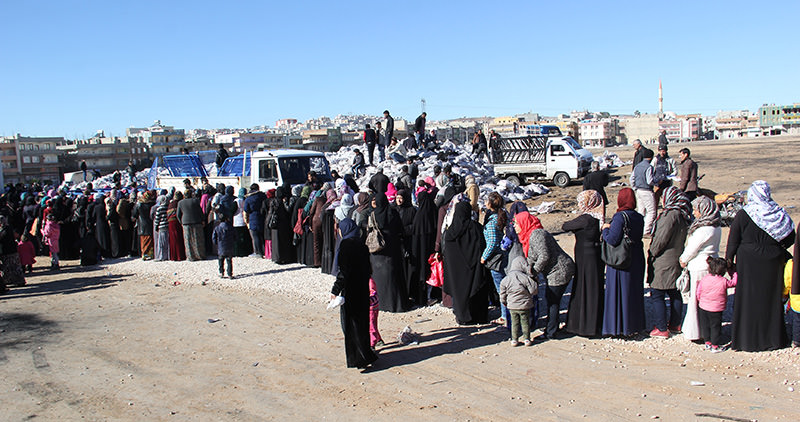 by Daily Sabah Dec 08, 2015 12:00 am
A report jointly prepared by Turkey's top employer body and academics said that the population of Syrian refugees in the country may exceed three million in the near future, while the employment conditions may further deteriorate unless concrete and permanent action is taken as already over 300,000 refugees work without social security.

The report titled, "Opinions, Expectations and Proposals of Turkish Business World regarding Syrians in Turkey," was prepared by the Turkish Confederation of Employer Associations (TİSK) and Hacettepe University Migration and Politics Research Center (HÜGO) by a staff of 12 people through research conducted in 18 provinces across Turkey in a period of 5 months.

The main finding of the study is that the Syrian population currently residing in Turkey, officially estimated as 2.2 million and 50 percent of all Syrians who fled their country, has more or less become permanent and is expected to exceed three million in the near future as families separated through war and migration may soon reunite. Only ten percent of this population, reported as the poorest and most fragile population by the study, currently resides in refugee camps, while the rest are being dispersed throughout Turkey, especially in southern provinces. The numbers show the burden Turkey undertook as at least 150,000 babies were born in Turkey and there are at least 1.8 million Syrians under the age of 18, of which 600,000 to 700,000 are at the compulsory school age and only 15 to 20 pursue their education.

"Determining their professional qualifications, providing them with education in Turkish and vocational training should be accepted as the main basis for their integration into Turkish society. The framework for legal employment of Syrians and their fields of employment should be determined. The government should work together with civil society," the study said.

The report on the study said that Turkey should take urgent and swift measures to integrate this population, as the current number of refugees have already exceeded the entire migration flow of two million since 1923, when the Republic was founded.

"The issue of Syrians in Turkey has already passed the threshold for being managed through a temporary basis and with emergency relief policies," the study said, adding that Turkey's economy and social balance is at stake if employment for Syrian refugees cannot be made through an extensive plan.

Turkey has a 10.1 percent unemployment rate, higher than most developing and major industrialized countries, while unemployment in Turkey's southern provinces bordering Syria, home to some 1.3 million Syrian refugees, have already exceeded the country's average since 2011. In major provinces like Gazintep, Hatay and Şanlıurfa, with respective 1.9, 1.8 and 1.5 million populations, the ratio of Syrian refugees with the local population were 16.4, 16.4 and 28.7 percent as of 2013, while in the minor province of Kilis, the ratio of Syrian refugees was 85.9 percent.
The report also said that so far, more than $7.6 billion was directly spent for Syrian refugees, of which 95 percent was provided by Turkey's public funds.

The study put forward an outlook of the Syrian population in terms of the labor force. Around 35,000 Syrian refugees are university graduates, and the number of Syrians with a qualified profession is very low, the study said. The estimated number of Syrians working without social security was acknowledged as 300,000 in the study, while only 3,686 were given official work permits since 2011. As Turkey experiences a global recession, stalling growth and political instability both at home and abroad in 2015, the views of Turkish public opinion has also shifted to negative over the employment of Syrians. A survey cited in the report shows that 48 percent of participants stated that Syrian refugees should not be given work permits in any conditions, while 28 percent said that temporary work permits should be given with only specified fields. 13 percent said that temporary work permits can be given for all sectors and only six percent said that work permits should be given without limitations. As an earlier study shows that Turks overwhelmingly think that Syrian refugees should not be granted citizenship with 85 percent, business world is more pragmatic over the issue with 40 percent supporting such a move.

The study pointed to a 100,000 employment opportunity in stockbreeding and refugees should be given vocational training by Agriculture Credit Cooperatives.
Last Update: Dec 08, 2015 1:33 pm
RELATED TOPICS