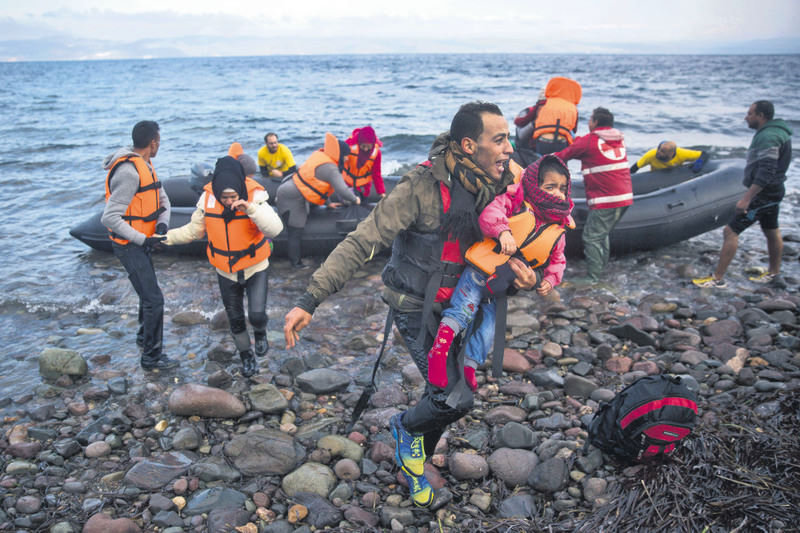 A man and a child after their arrival on a raft from the Turkish coast to the Greek island of Lesbos.
by Daily Sabah with Wires Dec 10, 2015 12:00 am

After EU pressure on Greece to control the large numbers of migrants entering Europe, Greece closed a border crossing with Macedonia that would carry stranded refugees to Athens. Meanwhile, another 12 refugees, including five children, drowned in the Aegean Sea

Greek police started removing hundreds of migrants stranded on the Greek-Macedonian border and blocking rail traffic on Wednesday, a police official as well as a Reuters eyewitness said.

Some 1,200 people, mostly from Pakistan, Morocco and Iran, were stuck near the northern Greek town of Idomeni, demanding to cross into Macedonia to reach northern Europe after non-EU Balkan states began filtering migrants out by nationality. The police official said the migrants would be taken to Athens on buses and accommodated in migration centers before being sent back to their home countries. Hundreds of thousands of people streamed into Europe this year, mostly through Greece, but Balkan states began blocking passage last month to all but Syrians, Iraqis and Afghans, who are considered as refugees because they are fleeing war zones.

Clashes have flared in the last two weeks between police and stranded migrants blocking the Greek-Macedonian crossing for refugees and the railway line running between the two countries. A Moroccan man was electrocuted to death on the line last week. Macedonia has erected a metal fence to keep others out and plans to extend it to cover more than 40 kilometers of the border.

The Associated Press reported yesterday police in northern Greece have closed a border crossing with Macedonia and are stopping people from getting within 5 km of it following a standoff with hundreds of people who have been denied entry.

Authorities closed the area early on yesterday and briefly detained journalists and photographers at the perimeter. More than 200 riot police have been deployed to the border area at Idomeni following the standoff that has halted freight rail services from Greece to other European countries. The migrants have been stranded at the border for three weeks after authorities in Macedonia restricted access to citizens from countries normally granted political asylum, such as Syria and Iraq. Police said the migrants would be moved to Athens in buses.

More than 886,000 migrants have arrived in Europe by sea so far this year, according to the latest UN figures, by making the short but perilous journey by boat or rubber dinghy from Turkey to outlying islands. Thousands more have drowned. The majority of migrants come from the Middle East and Africa. The turmoil in the Middle East and the five-year war in Syria have led many people to flee the conflict in an attempt to seek security and shelter in a more prosperous and peaceful country, such as one in Europe. However, Europe has been slammed for lacking a collaborative response to the crisis.
RELATED TOPICS