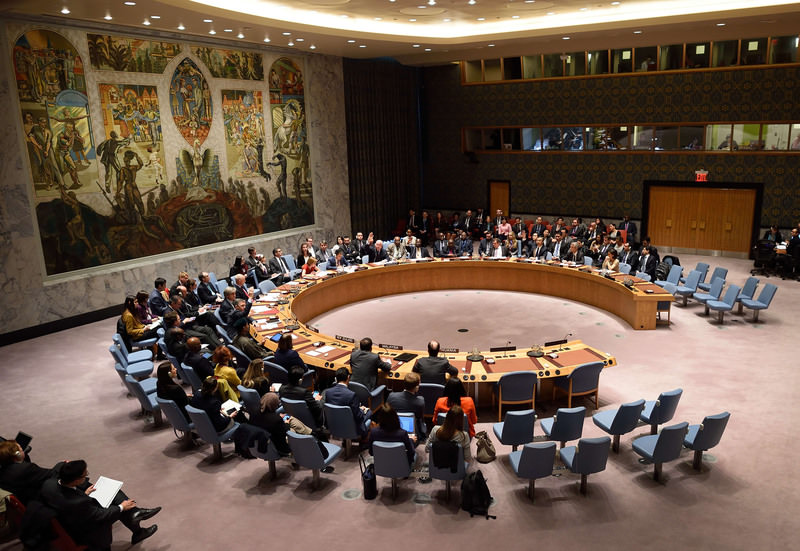 The United Nations Security Council votes during a UN Security Council meeting on the Human Rights situation Dec 10, 2015. (AFP Photo)
by Ragıp Soylu Dec 15, 2015 12:00 am
The U.N. Security Council's new resolution will focus on preventing Daesh infiltration into the international financial system with new sets of standards that would minimize illicit money smuggling across the Syrian border, a senior U.S. treasury official told journalists on Tuesday.

The U.S. and Russia, in a rare show of collaboration, recently convinced all parties in the U.N. Security Council to renew the already implemented sanctions on al-Qaeda, by adding the Daesh terrorist group as another target. The American official said they were already working with over 30 jurisdictions to cut Daesh off from the international financial system but Turkey, Jordan and specifically Iraq needed to do more. Daesh does not have direct access to international financial markets, even in regime-controlled areas because Damascus is already disconnected from the financial world. Instead, Daesh militants smuggle their funds across the borders and gain access to basic money services such as exchange houses and money transfer companies to move their assets, the official said.

The new resolution would also require U.N. members to update their financial systems in terms of sanctioning terror suspects. The official said, "In some countries, aiding or donating money to a group or a person who has conducted terrorist attacks is a crime. But that is toolimited. Donating money for their recruitment efforts or any activity should be a crime."

U.S. officials aim to criminalize recruiting efforts for foreign fighters, including publicity makers, with this resolution. U.N. Security Council will ask all member countries to increase information sharing on suspected activities, especially both private and public funds are important.

However the American official failed to provide an estimate of the total worth of DAESH activities in the international financial system. "Our evidence is partial. But after this resolution we will have more information," he said, hoping that they would be able to see the picture more clearly.

The official also said that they believe the Syrian regime was buying gas from DAESH-controlled areas. "We don't know if the Assad regime is partaking in this trade but gas ends up being used in government areas. We don't know how much DAESH is making fromgas trade. No estimate yet," he added.