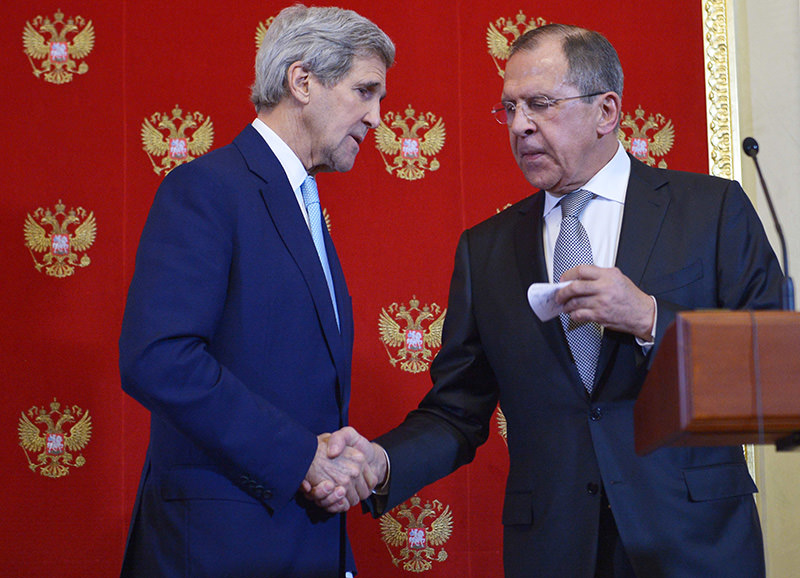 by Daily Sabah with Agencies Dec 15, 2015 12:00 am
United States Secretary John Kerry said that a collobration between United States and Russia can 'make a significant difference' on Syria conflict and confirmed with Russian Foreign Minister Sergey Lavrov that a planned international meeting on the Syrian crisis would take place in New York on Friday.

"We support the idea of convening in New York another meeting of the International Syria Support Group at the ministerial level this Friday, December 18," Lavrov said on Tuesday.

Speaking at a meeting with Russian President Vladimir Putin in Moscow, Kerry said the Vienna meetings to solve the Syrian war were "a strong beginning".

The talks called for political transition in Syria based on the 2012 Geneva Communique with a cease-fire due on Jan. 1.

Kerry added: "The United States and Russia have an ability to be able to make a significant difference here."

Putin said that Moscow and Washington were working together to solve the most urgent crises in the world.

Russia and a U.S.-led coalition are conducting separate air campaigns in Syria. While the U.S. and its allies are almost exclusively targeting Daesh, Russia has attacked a wide range of groups opposed to Syrian President Bashar al-Assad, including "moderate" groups supported by Turkey and the West.

Washington has long-maintained that a political solution to the conflict cannot include Assad, a lynchpin of Russian influence in the region.

Syria's civil war, now in its fifth year, has left at least 250,000 people dead, according to the UN. More than 11 million Syrians have been internally displaced and millions more are seeking refuge abroad.