Not all Syrian refugees in Turkey 'eager to go to Europe' 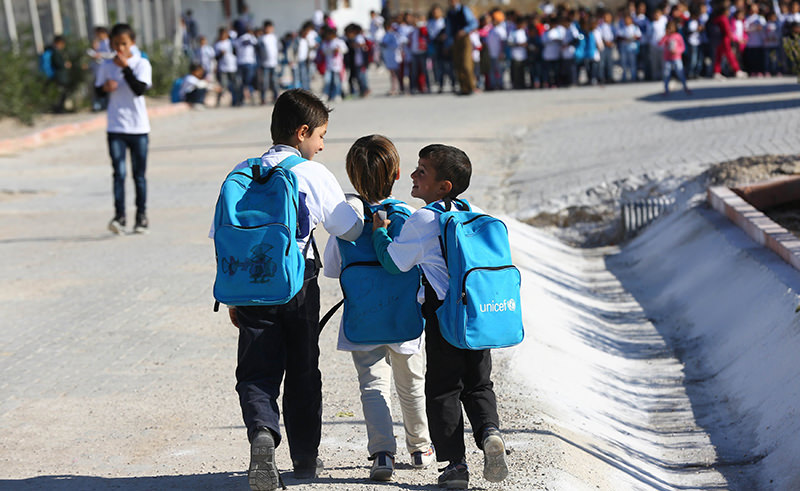 Syrian Refugee children walk past carrying backpacks outside their school at the refugee camp in Osmaniye on December 15, 2015. (AFP Photo)
by Dec 17, 2015 12:00 am
Mohammed, 22, has lived in Turkey for four years since fleeing Syria, just months after the civil war erupted that has torn his homeland apart.

But unlike hundreds of thousands of others who this year crossed the Aegean Sea in search of better lives in Europe, he has no plans to leave.

"I have no dreams of going to Europe," Mohammed, from the Syrian coastal region of Latakia, told AFP in the Osmaniye refugee camp in southern Turkey.

"I will continue my education with God's permission and start a life here before returning to Syria once the war is over," added Mohammed, whose own relatives left and went to Belgium.

Mohammed attended Turkish language classes and was found eligible in 2013 to attend university in the southeastern city of Mardin. He says he now wants to graduate and build a new life in Turkey.

The European Union wants to see more cases like Mohammed -- people who find the right conditions to live in Turkey rather than travelling to Europe, and want to return to Syria when the time is right.

Grappling with the influx of migrants, Brussels struck a deal in November with Ankara for Turkey to help stem the flow of migrants in return for three billion euros ($3.2 billion) in aid for Syrian refugees.

On Thursday, German Chancellor Angela Merkel will lead a meeting on the migrant crisis, Europe's worst since World War II, of eight European states and Turkey.

Turkey is home to at least 2.2 million Syrian refugees after President Recep Tayyip Erdogan declared an open door policy at the onset of the war.

But it has long complained of being given next to no financial help to look after them, despite spending some $8 billion itself.

EU ambassador to Turkey, Hansjorg Haber, who AFP accompanied on a visit to the Osmaniye camp, said there would be a new focus with the injection of fresh funds under the Ankara-Brussels deal.

"I think we have to rely on two things. One is making staying in Turkey more attractive" for the Syrian refugees in the country.

"And the other is that we have to suppress human trafficking at the border with the help of Turkish police," he told AFP.

Only around 260,000 Syrians stay in camps near the border, with the vast majority scattered throughout the country including big cities like Istanbul.

Refugees in camps have access to basic services like education and healthcare. But many families bank on young men working outside to earn a living and many youth work as cheap laborers well below the average wages.

"We cannot survive without working outside," said 35-year-old Azimet Tusuz, carefully examining the prices of different brands of cooking oil at the supermarket.

Education is one of the main challenges. In September, the Turkish government promised to double the number of Syrian refugees at school, from the current 230,000.

"It is an ambitious one. We are working very closely with the education ministry to make sure this target is realized," Philippe Duamelle, Turkey representative for the UN Children's Fund (UNICEF), told AFP.

He said UNICEF faced a double challenge to keep up standards in the widely-praised camps and to look after the more than 85 percent of the refugees living outside the camps.

"Therefore, there's a need to scale up the services for both."

Adding to the challenge, some 150,000 Syrian children have been born in Turkey since the start of the crisis.

Maha Abdullah, 38, waiting for her 12-year-old daughter at a training center for Syrian girls in the city of Şanlıurfa founded with EU funds, said earning a living was a priority.

"We have no problem with schools," she said. "But rent, electricity, water bills are the biggest problem."
The World Food Program (WFP), which has rolled out electronic vouchers for Syrian refugees to shop at supermarkets, is hoping to utilize more funds after the Ankara-Brussels agreement to reach out to the most vulnerable Syrians living outside the camps.
"If we cannot provide them with minimum assistance they might be likely to move again. We are not politicians. It's not our job to stop migration," WFP's Turkey representative Jean-Yves Lequime told AFP.
Some refugees are angry with their fellows who risked their lives to go to Europe.
"People are dying to go to Europe, while some are dying for their homeland in Syria. I don't want to go to Europe. There's nothing like your homeland," Ahlem Hanefi, 33, said at the Osmaniye camp.