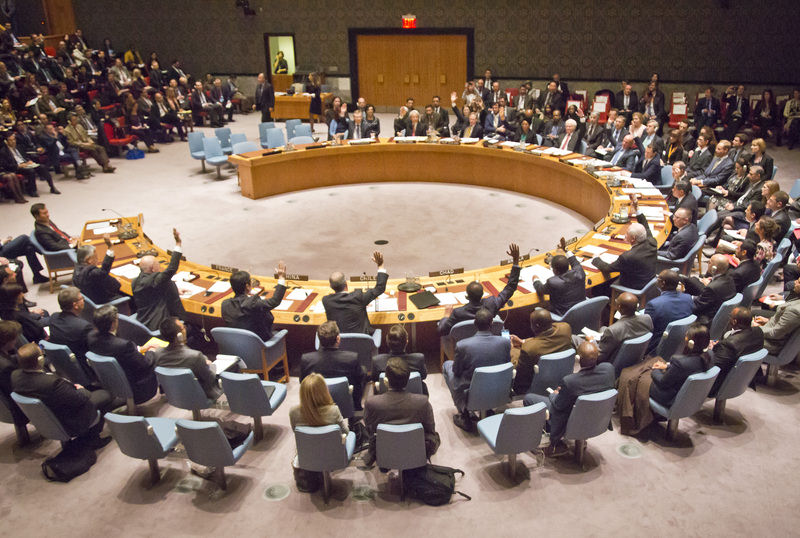 by Daily Sabah with AP Dec 17, 2015 12:00 am
Finance ministers from the 15 Security Council nations unanimously adopted a plan Thursday aimed at disrupting revenue that the Daesh extremist group gets from oil and antiquities sales, ransom payments and other criminal activities.

Daesh is already subject to U.N. sanctions under resolutions dealing with al-Qaida. The proposed Security Council resolution, sponsored by the United States and Russia, elevates Daesh to the same level as al-Qaida, reflecting its growing threat and split from the terror network behind the 9/11 attacks.

U.S. Ambassador Samantha Power called the meeting an unprecedented chance to bring together the people with the technical abilities to starve Daesh of resources.

Daesh controls a large swath of Syria and Iraq, including oil and gas fields, though bombing campaigns by the U.S.-led coalition and ground forces have enabled Iraq to regain some territory.

Adam Szubin, the acting U.S. Treasury undersecretary for terrorism and financial intelligence, said getting at the group's revenue is a serious challenge because much of its money comes from oil and gas sales within territories it controls that have the potential to generate hundreds of millions of dollars annually, as well as from taxation and extortion.

This is in contrast to al-Qaida, whose funding typically comes only from kidnappings for ransom and from outside donors, including charities, he said at a White House briefing on Wednesday.

"The good news is Daesh has a number of vulnerabilities as well," Szubin said. "They are fighting a multi-front war at the same time that they are trying to provide governance, provide assistance to overseas affiliates, and trying to build this reputation of a 'supposedly Islamic' caliphate."

He stressed that Daesh needs access to the international financial system for oil equipment, weapons, communications equipment and other imported items which requires them to move funds ideally leaving a "money trail" that can be disrupted.

The Daesh terrorist organization is also earning some money from oil and gas sales outside its territory, the sale of antiquities to foreign buyers and ransom payments.

The United States has not seen any evidence that the Turkish government is purchasing oil from Daesh and believes the preponderance of the group's sales are to middlemen or black marketeers who are in turn selling to others, Szubin said.

The Syrian government is purchasing gas, he said, but a lot of the group's oil is going to territory they control for their military campaigns and to provide electricity to areas they are trying to govern.

Sapin said U.N. resolutions are part of a broader effort to fight its financing.

It also requires all countries to monitor and control the flow of money to individuals and groups "liable to commit terrorist acts," he said Thursday, and a key way to do this is to fight financial transfers where the senders and receivers are anonymous.

The draft resolution stresses that "any individual, group, undertaking, or entity supporting Daesh or al-Qaida" is subject to U.N. sanctions, including an asset freeze, travel ban and arms embargo.

Power said the resolution will be a new piece of international law that "will require countries to do more than they have been doing."

The resolution, which will be legally binding if adopted, is drafted under Chapter 7 of the U.N. Charter, which can be militarily enforced.

It encourages the 193 U.N. member states "to more actively submit" names for inclusion on the sanctions list and expresses "increasing concern" at the failure of countries to implement previous sanctions resolutions.

The proposed resolution urges countries to share information about extremist groups and calls for a report within 120 days on what every country is doing to tackle the financing of Daesh and al-Qaida.
Last Update: Dec 17, 2015 11:03 pm
RELATED TOPICS