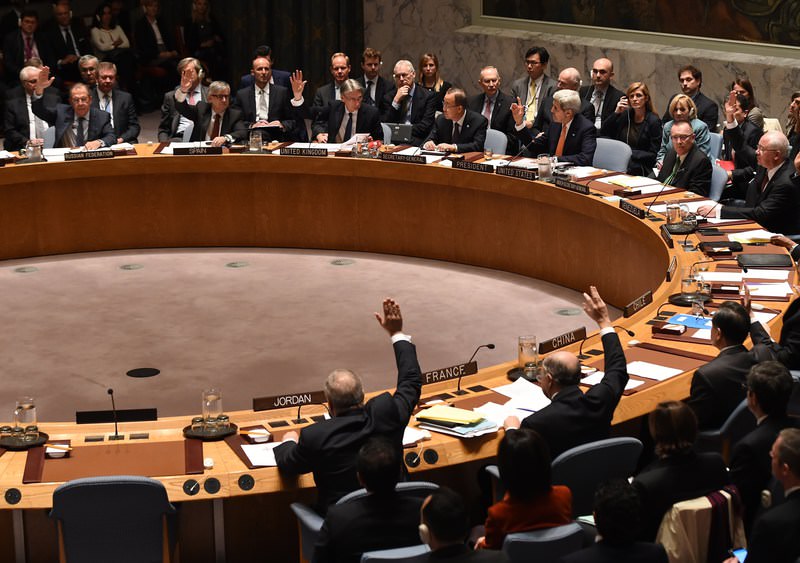 The UN Security Council on Friday unanimously adopted a resolution endorsing a peace process to put an end to the nearly five-year war in Syria. The first step of the resolution foresees a ceasefire nationwide after which a UN-backed transition government will begin active duty.

U.S. Secretary of State John Kerry said the resolution sends "a clear message to all concerned that the time is now to stop the killing in Syria."

The resolution, however, does not touch on one of the most contentious issues in the peace effort: the fate of Syrian leader Bashar al-Assad.

The resolution backed by the 15-member council calls for formal peace talks and a ceasefire to be launched in early January.

The United States, Russia and the other three permanent Security Council members -- France, Britain and China -- had sought UN endorsement of the diplomatic effort to highlight international unity on the way forward in Syria.

The resolution states that the "only sustainable solution to the current crisis in Syria is through an inclusive and Syrian-led political process that meets the legitimate aspirations of the Syrian people."

The measure draws heavily on statements agreed during previous talks in Geneva and Vienna by calling for an "inclusive transitional governing body with full executive powers" in Syria.

It asks the United Nations to bring the Syrian government and the opposition to the table for formal negotiations on a political transition "with a target of early January 2016."

"There obviously remains sharp differences," Kerry said, alluding to the fate of Assad.

"For this to work, the process has to be led and shaped and decided by the men and women of Syria."

But he added: "If the war is to end, it is imperative that the Syrian people agree on an alternative in terms of their government."

Earlier in the day, the five permanent members of the United Nations Security Council were struggling to agree on a draft resolution endorsing an international bid to end the five-year-old civil war in Syria, as ministerial talks began in New York on Friday.

Western powers had hoped the council would rubber-stamp a resolution endorsing a two-year road map for talks between Syria's government and opposition on a unity government, expected to begin in January, and eventual elections.

Council diplomats said they aimed to clinch an agreement on a text. But a deal remained elusive on Friday morning as talks among the 17 members of the so-called International Syria Support Group got underway at New York's Palace Hotel.

The 15-nation Security Council was scheduled to meet at 3 p.m. ET (2000 GMT) to discuss Syria, but it was not yet clear whether they would have a resolution to adopt.

The road map, which also calls for a nationwide ceasefire that would not apply to Daesh, Nusra Front and some other militant groups, was worked out in two rounds of ministerial talks in Vienna.

"I'm not sure it's going to happen because there are some unfortunately deliberate, or not deliberate, attempts to undercut the Vienna documents and we don't want to see that," he told reporters on Thursday without elaborating.

Diplomats said the main problem with the resolution involved Russian and Iranian concerns about how to refer to a bloc of opposition groups that would join U.N.-led peace talks with the Syrian government set to begin in January.

Western officials say a recent meeting in Saudi Arabia of opposition figures made significant headway in coming up with an opposition bloc, though Russia and Iran have questioned the legitimacy of the Saudi-hosted discussions.

In a dig at Saudi Arabia, Iranian Foreign Minister Mohammad Javad Zarif wrote in The Guardian on Friday it was "utterly absurd that those who have denied their own population the most rudimentary tenets of democracy ... are now self-declared champions of democracy in Syria."

"Their democracy, however, is not to give Syrians a voice, but instead to thwart the political process by stonewalling a ceasefire, while pushing for self-proclaimed al Qaeda affiliates to have a prominent place at the negotiating table," he wrote. "Only ballots - not bullets - can ultimately usher in a new era in Syria."

The Riyadh conference agreed to set up a 34-member secretariat to supervise peace talks, and that committee will also select the opposition's negotiating team.

China's Foreign Minister Wang Yi warned that the political process could go backwards if no progress was made in New York.

"The two most important issues are the launch of the political negotiation and the other is the ceasefire," Wang added. "We hope this meeting can form a consensus on these two major issues and generate concrete actions."

German Foreign Minister Frank-Walter Steinmeier said there was "some movement" in the talks on Syria, adding that one goal of the New York meetings was to clarify the timeline for peace talks between the government and opposition.

Foreign ministers from 17 countries, including Russia's Sergei Lavrov, U.S. Secretary of State John Kerry and other European and Middle Eastern ministers, as well as top diplomats from regional rivals Turkey, Saudi Arabia and Iran, were in New York for the Syria meetings.

Earlier this week diplomats said some progress had been made on the most difficult sticking point in the talks: the fate of Syria's Bashar al-Assad.

They said Russia had indicated it had no problem with the eventual ouster of Assad at the end of a transition period, though it would not admit that publicly.
Last Update: Feb 24, 2016 6:54 pm
RELATED TOPICS