One million asylum-seekers arrived in Europe in 2015: IOM 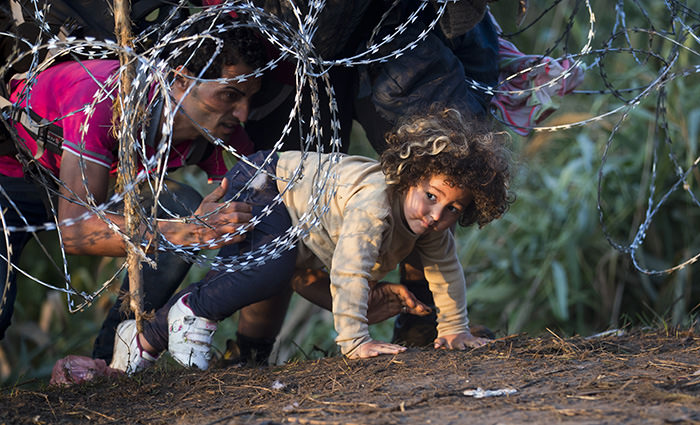 a child is helped cross from Serbia to Hungary through the barbed wire fence near Roszke, southern Hungary (AP Photo)
by Anadolu Agency Dec 22, 2015 12:00 am
Over one million refugees have arrived in Europe by sea and land this year so far, the International Organization for Migration (IOM) said on Tuesday.

According to IOM, almost 3,700 refugees died crossing the Mediterranean and 1,005,504 refugees have arrived in Europe by sea and land so far this year.

Some 219,000 refugees and migrants arrived in Europe via the Mediterranean last year.

"Persecution, conflict and poverty have forced an unprecedented one million people to flee to Europe in 2015," the UN Refugee Agency, UNHCR and IOM said in a joint statement.

"One-in-every-two of those crossing the Mediterranean this year-half a million people-were Syrians escaping the war in their country. Afghans accounted for 20 per cent and Iraqis for seven per cent," the IOM and UNHCR revealed.

The organizations said 800,000 refugees reached Europe via the Aegean Sea from Turkey to Greece, accounting for 80 percent of the refugees arriving irregularly in Europe by sea in 2015.
Last Update: Dec 22, 2015 1:32 pm
RELATED TOPICS