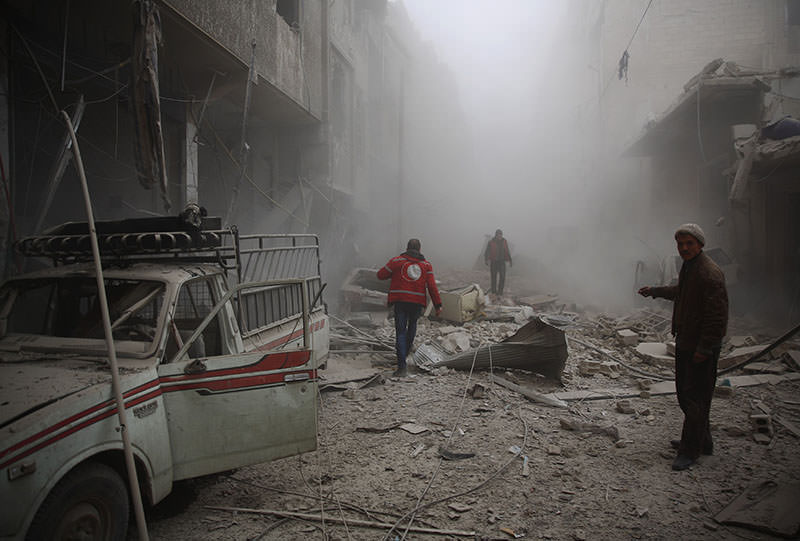 Members of the Syrian Arab Red Crescent search for survivors amid the rubble of destroyed buildings following air strikes in opposition-held town of Douma, in Syria, on Dec 13, 2015 (AFP photo)
by Compiled from Wire Services Dec 22, 2015 12:00 am
At least 35 people were killed and scores were injured in Syria on Tuesday when Russian jets attacked a marketplace in Eastern Ghouta, local sources told Anadolu Agency.

According to the Syrian Civil Defense, the airstrikes targeted an opposition-controlled village, also killing a number of women and children.

The pro-opposition Syrian Observatory for Human Rights confirmed that nine pupils were killed in Daesh shelling on and around the school in the city's Harabish district.

Syrian government forces control parts of central Deir al-Zour and the nearby military airport, their only remaining toehold in Daesh-controlled eastern Syria.

The area has seen fierce fighting throughout the year as the terrorists seek to eliminate the government presence.

In the eastern outskirts of Damascus, 19 civilians were killed in a government airstrike in the hotly contested Marj al-Sultan area, the Observatory said.

According to UN children's agency UNICEF, more than 10,000 children have been killed since the conflict broke out in 2011, and more than 2.2 million are refugees in neighbouring countries.

A quarter of Syrian schools are out of use because of war damage or used as shelters and 2.7 million children are out of school, the agency says.
Last Update: Feb 24, 2016 8:40 pm
RELATED TOPICS