Those who reject Syrian refugees are allies of extremists: UN refugee chief 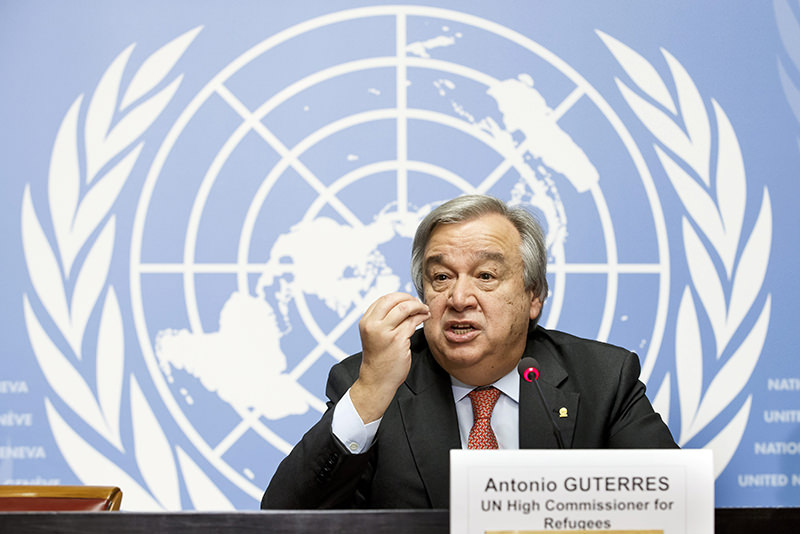 Antonio Guterres during a press conference at the European headquarters of the U.N. in Geneva, Switzerland, 18 Dec 2015. (EPA Photo)
by Dec 22, 2015 12:00 am
People who reject Syrian refugees are the "best allies" of Daesh militants and other extremists, the United Nations refugee chief said on Monday after U.S. Republican presidential candidate Donald Trump proposed an entry ban on foreign Muslims.

More than 4.3 million Syrians have fled a nearly five-year civil war. U.N. High Commissioner for refugees Antonio Guterres told the Security Council they cannot be blamed for the terror they are risking their lives to escape.

"Those that reject Syrian refugees, and especially if they are Muslim, are the best allies of the propaganda and the recruitment of extremist groups," Guterres said in a swipe at Trump and some U.S. state governors and European leaders.

Democrat presidential candidate Hillary Clinton said on Saturday that Daesh is using Trump's rhetoric to enlist fighters to radicalism. Trump rejected her claim and called her a "liar."

Amid the chaos of Syria's war, Daesh has seized swathes of territory and proclaimed a caliphate. The group claimed responsibility for the deadly Nov. 13 attacks in Paris and also said a married couple who carried out a mass shooting in Southern California on Dec. 2 were its followers.

The attacks sparked warnings from politicians in Europe and North America that countries could face big risks by admitting refugees without rigorously determining if any could be dangerous extremists.

Several U.S. states said they would close the door to Syrian refugees, while Trump - currently the Republican Party's front-runner for the November 2016 election - called for a ban on foreign Muslims entering the United States.

"We must not forget that - despite the rhetoric we are hearing these days - refugees are the first victims of such terror, not its source," Guterres said. "They cannot be blamed for a threat which they're risking their lives to escape."

"Yes, of course there is a possibility that terrorists could try to infiltrate refugee movements. But this possibility exists for all communities - and homegrown radicalization is by far the biggest threat, as all recent incidents have shown," he said.

He said a U.N. survey of 1,200 Syrians who had fled to Europe found that 86 percent of them had a secondary school education and almost half had gone to university.

"Syria is experiencing a massive brain drain," said Guterres, who will step down at the end of the year. "One can only imagine the disastrous consequences of such an exodus on the future post-conflict reconstruction of Syria."