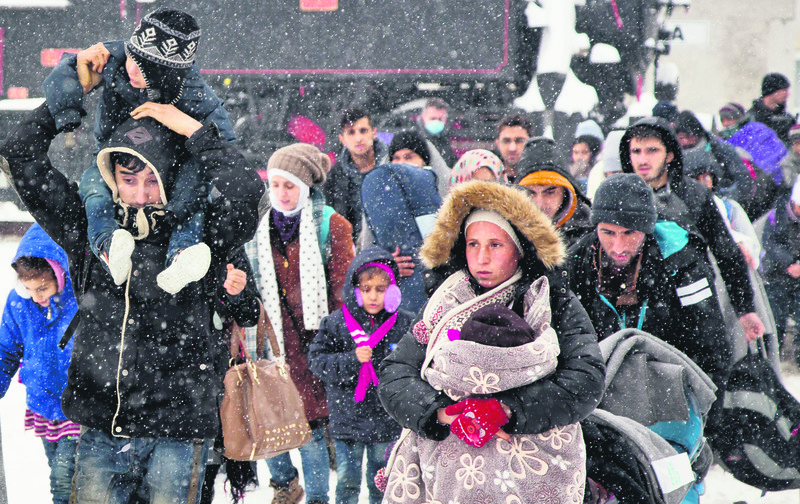 Migrants, some of whom have been on the move for months, now face more challenging conditions on their journey to Europe due to snow and freezing conditions. As the EU struggles with division, desperate migrants keep walking long distances in the middle of winter

It's the first time that Arman Butt, a Pakistani man desperately seeking to reach Western Europe, has seen snow. But, as the 30-year-old goes numb in the brutal chill, stuck at the Slovenian-Austrian border, he wishes it was not quite so cold.

He is one of some 50 men braving freezing temperatures and walking the short distance that separates the Austrian border post from Slovenia. Butt is from Lahore, in eastern Pakistan. He has been on the move since Sept. 20. A few hours ago, he was pushed back into Slovenia by Austrian border guards. Wearing canvas shoes, his feet are frozen and he can barely walk. Yet he is determined to keep trying until he makes it across. Slovenian civil defense teams and army troops march alongside the migrants towards Austria's Spielfeld frontier post.

Every day, some 900 refugees and migrants who have braved freezing-cold temperatures arrive here on trains from Croatia, further south. Most people are reaching the shores of Europe having fled wars, violence and persecution in Syria, Iraq and Afghanistan.

Many others though, like Butt, are in search of a better life. They are facing major difficulties in getting across borders on the so-called Balkan migrant route to Western Europe. Another large group of men at the Slovenian border post of Sentilj – mainly Moroccans and Algerians – told AFP they have been pushed back from the Austrian frontier up to five times each in recent days, leaving them in a state of limbo between the two countries. During the last week of December, Austrian police manning the border post of Carinthia said they had pushed back "several hundred" migrants suspected of having claimed a false nationality in a bid to get through. The Slovenian interior ministry on Tuesday said Austria had pushed back 956 migrants since Dec. 26. "Most of them eventually went into Austria, after a new registration process and additional checks," the ministry said in a statement.

Several European states have introduced unprecedented border controls since the peak of the migrant crisis last year. German – the EU powerhouse and migrants' preferred destination – as well as Austria have tightened controls since mid-September. Sweden, long seen as a haven for refugees, introduced temporary controls on Monday, triggering a domino effect and prompting Denmark to do the same on its frontier with Germany. Butt said he left Pakistan in September because he was convinced that "Europe had opened up its borders." "We can't go backwards, we have spent too much money to come here," he said, adding that he has already spent 7,000 euros ($7,500). He has paid smugglers exorbitant sums to cross the Aegean Sea and then non-EU member Macedonia, which has made it especially hard since November for people not fleeing war zones to enter.

At a transit camp for migrants at Gevgelija near the Macedonian border with Greece, many people have fallen ill in recent days "especially children" because of the low temperatures that have hit Europe and the Balkans since the start of the year, according to aid worker Lence Zdravkin. "More and more people are arriving here without any money, unable to continue their journeys," Zdravkin said, adding that many had been left penniless by their smugglers.

People "arrive wet and with colds, with wet shoes... kids have fever and are coughing," said Jasmin Rexhepi, who works for a Macedonian non-governmental organization (NGO) Legis. Further north in Serbia, where temperatures have reached -8 degrees Celsius, a bus system has been set up to help migrants on the move reach the transit camp in Presevo near the Macedonian border. "However, it does not stop refugees, who are still arriving with children, elderly and even disabled people," said Dafina Aliji, a local humanitarian activist. "Nothing can stop them."

The number of people forcibly displaced worldwide is likely to have surpassed 60 million by the end of this year, the U.N. said. More than a million refugees and migrants arrived in Europe in 2015 in the worst crisis of its kind to face the continent since World War II. The majority of migrants come from the Middle East and Africa. The turmoil in the Middle East and the five-year war in Syria have led many people to flee the conflict in an attempt to seek security and shelter in a more prosperous and peaceful country, such as one in Europe. However, Europe has been slammed for lacking a collaborative response to the crisis.
RELATED TOPICS