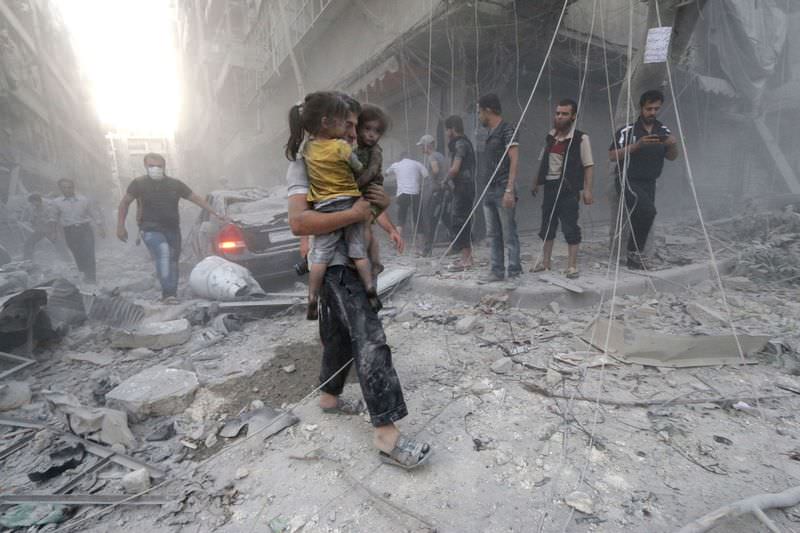 | AFP Photo
by Anadolu Agency Jan 12, 2016 12:00 am
The U.S. is "deeply concerned" about reports of civilian casualties from Russian airstrikes and collateral damage to civilian facilities, the State Department said Monday.

"We continue to remain concerned about reports of civilian casualties caused by Russian airstrikes and collateral damage, damage done to facilities that are used or primarily for innocent civilians, whether it's schools, hospitals or homes," said State Department spokesman John Kirby.

More than 570 civilians have been killed since Sept. 30 when Russia began airstrikes to prop up the Assad regime, according to a December report by the Syrian Network for Human Rights. Moscow claims that it is hitting Daesh militants but reports indicate civilians are being hit.

Kirby said about 70 percent of Russian airstrikes were conducted against either opposition groups or innocent targets.

"If they're true, they're certainly deeply, deeply concerning and they're not -- those reports are not inconsistent with other credible reports we've received about hitting or -- and striking innocent civilian targets."

The State Department's comments come after The Syrian Observatory for Human Rights claimed that 17 people, including eight children, were killed and 20 others were injured in a Russian airstrike that hit a school in Aleppo on Monday.

The strike followed a series of air raids Saturday on the opposition-held Maarat al-Numan district in northwestern Idlib province. The attacks, blamed on Russian warplanes, left dozens of civilians dead, according to activists.

Kirby said the Assad regime has to continue to allow humanitarian assistance into besieged towns after four aid trucks reached the town of Madaya on Monday.

"We've seen the reports of this convoy that was able to get to Madaya and I think to a couple other towns today. That's good," Kirby said.

The trucks are part of a 49-vehicle convoy staffed with 20,000 personnel. The trucks have also entered the towns of Foa'a and Kefraya, near the border with Turkey.

Last month, 23 victims died of starvation in Madaya. Living conditions there have deteriorated as winter sets in. Electricity supplies have been cut and residents have resorted to burning the remains of their homes to provide heating.
Last Update: Jan 12, 2016 8:46 am
RELATED TOPICS