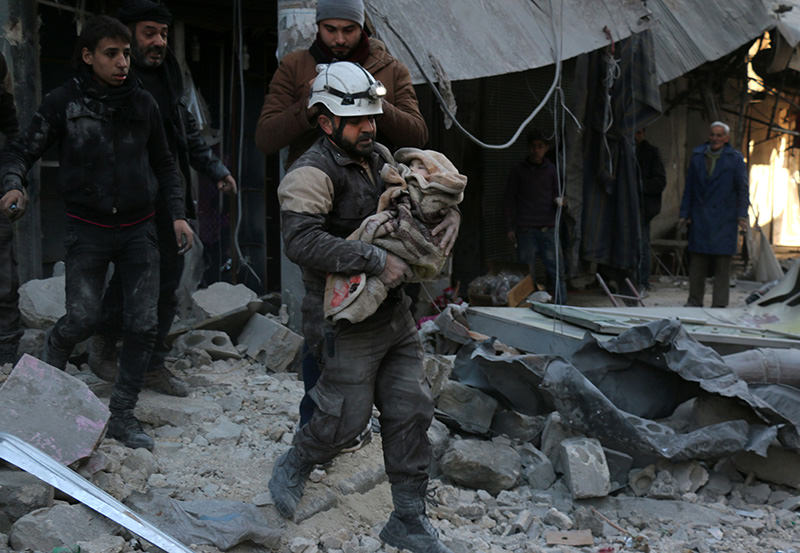 |Archive photo from Deir al-Zor shows the aftermath of an airstrike of al-Assad (AFP Photo)
by Daily Sabah with AFP Jan 17, 2016 12:00 am
A Daesh attack Saturday in the eastern Syrian city of Deir al-Zor killed at least 135, including 85 civilians, a monitor said, with state media denouncing a "massacre". At least 400 civilians were kidnapped after the attack, a monitoring group said.

If confirmed it would be one of the highest tolls for a single day in Syria's nearly five-year war.

The bloodshed in Deir al-Zor came as regime forces battled Daesh in the northern province of Aleppo, killing at least 16 militants, and as air strikes hit the Daesh stronghold of Raqqa.

The Syrian Observatory for Human Rights said Daesh had advanced into the northern tip of Deir al-Zor city and captured the northern suburb of Al-Baghaliyeh.

Initially it reported that 35 Syrian soldiers and allied militiamen were killed in the multi-front attack, which included a suicide bombing.

But as the day unfolded the death toll rose, with the Britain-based monitor saying that civilians were among those killed in Deir al-Zor.
It said most of the victims were killed execution-style in Al-Baghaliyeh.

"The Daesh terrorists carried out a massacre in Al-Baghaliyeh, claiming the lives of around 300 civilians, most of them women, children and elderly people," the agency said.

It quoted Syrian Prime Minister Wael al-Halaqi as saying that the "legal and moral responsibility for this barbaric and cowardly massacre... lies on the shoulders of all the states that support terrorism and that fund and arm takfiri" groups.

According to the Observatory, the advance puts Daesh in control of around 60 percent of Deir al-Zor city, capital of the province of the same name in an oil-rich region bordering Iraq.

Daesh said its fighters carried out several suicide bombings against regime forces in Deir al-Zor and seized control of Al-Baghaliyeh and other areas.

The Observatory said Russian warplanes were carrying out heavy air strikes in support of regime forces as they sought to repel the extremists.

The Observatory said heavy fighting was ongoing Saturday in the area, with Russian warplanes carrying out strikes in the region between the regime-held Kweyris air base and Al-Bab.

Raqqa, the self-declared capital of Daesh, has come under frequent air strikes by the US-led coalition, the Syrian air force and Russian warplanes.

On Saturday at least 16 people, including civilians, were killed in air strikes and 30 others were wounded, said Abdel Rahman.

He said eight strikes hit the city and its surroundings but did not specify who carried them out.

British Foreign Secretary Philip Hammond, in comments reported Saturday, said some 600 Britons have been stopped from going to Syria to join Daesh and other extremist groups.

Hammond said these interceptions as well as air strikes were placing extra strain on Daesh in its Raqqa headquarters.

"There is evidence (DAESH) is finding it difficult to recruit to the brigades in Raqqa because of the high attrition rate of foreign fighters," he said, according to The Guardian and The Daily Telegraph newspapers.