Burden of Syrian crisis should be shared, not be left to neighboring countries: UNHCR chief 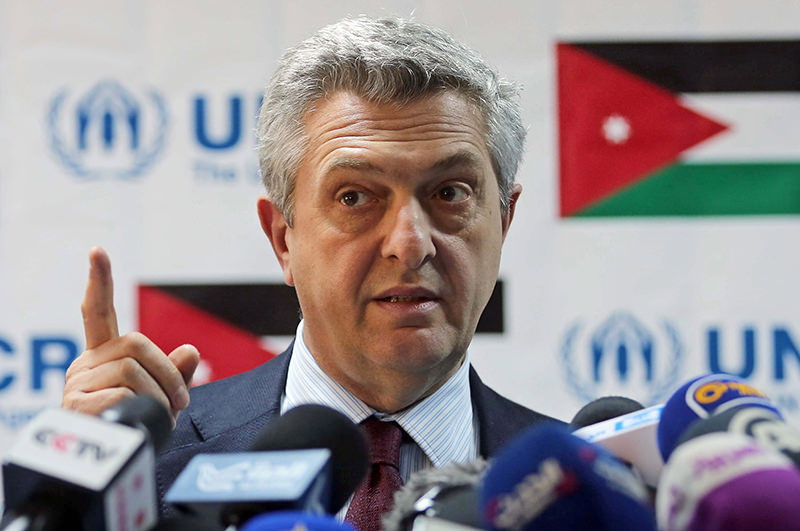 UNHCR chief Filippo Grandi gives a press conference at Zattari Syrian refugee camp near the city of Mafraq, Jordan, 18 January 2016. (EPA Photo)
by Daily Sabah with AP Jan 18, 2016 12:00 am
The new chief of the U.N. refugee agency said Monday the world should find 'a fairer formula' for sharing the burden of Syrian crisis, including taking in tens of thousands of refugees from overwhelmed regional host neighbors.

Filippo Grandi, who assumed his post earlier this month, heads an agency grappling with mounting challenges as Syria's five-year-old civil war drags on. Humanitarian aid lags more and more behind growing global needs, including those caused by the Syrian conflict.

More than 4 million Syrians have fled their homeland, the bulk living in increasingly difficult conditions in neighboring countries such as Turkey, Jordan and Lebanon, while hundreds of thousands have flooded into Europe.

Turkey is one of the neighbors most affected by the 5-year-old civil war in Syria, having hosted 2 million refugees.


Grandi came to Jordan after a stop in Turkey. Later this week, he is due in Lebanon. He visited the Zaatari refugee camp in Jordan after meeting with King Abdullah II in the capital, Amman.

His agency, UNHCR, hopes to raise money for refugees at a London pledging conference in February, followed by an international gathering in March in Geneva where countries would commit to taking in more refugees.

"I think we need to be much more ambitious" about resettling refugees, Grandi said. "We are talking about large numbers ... in the tens of thousands."

"What is needed is a better sharing of responsibilities, internationally, for a crisis that cannot only concern the countries neighboring Syria," he said.

Hundreds of thousands of refugees entered Europe in 2015, often with the help of smugglers who ferried them across the Mediterranean in dangerous voyages.

Grandi said it was time to create legal ways for some refugees to leave overburdened host countries.

Grandi and his Jordanian hosts also discussed a potentially contentious issue the fate of some 17,000 refugees who have amassed on the Syrian-Jordanian border, with numbers rising rapidly in recent months.

They are stranded in a remote desert area, with Jordan only admitting several dozen each day after stringent security checks. UNHCR has warned that the refugees face deteriorating conditions, including lack of adequate shelter.

Jordanian government spokesman Mohammed Momani said Sunday that Jordan believes Islamic State supporters are among the refugees, many of whom fled areas of Syria currently under IS control.

Momani said Jordan's security is a priority, suggesting a change in the current admissions policy is unlikely. He said aid workers are given access to the area and that Jordan will fly the refugees to any country willing to accept them.

Momani said Jordan has not shifted from what it calls an "open border policy" toward refugees, even though the number of admissions has dropped sharply since the early days of the Syria conflict.

Grandi said Monday he has "asked for is for this rhythm of admissions (to Jordan) to increase and to be expedited," and that the dialogue with Jordan is constructive.

Andrew Harper, the UNHCR chief in Jordan, said the agency is trying to address Jordanian security concerns, but "we will not set up a camp in an insecure environment" on the border.
Last Update: Jan 19, 2016 1:11 am
RELATED TOPICS