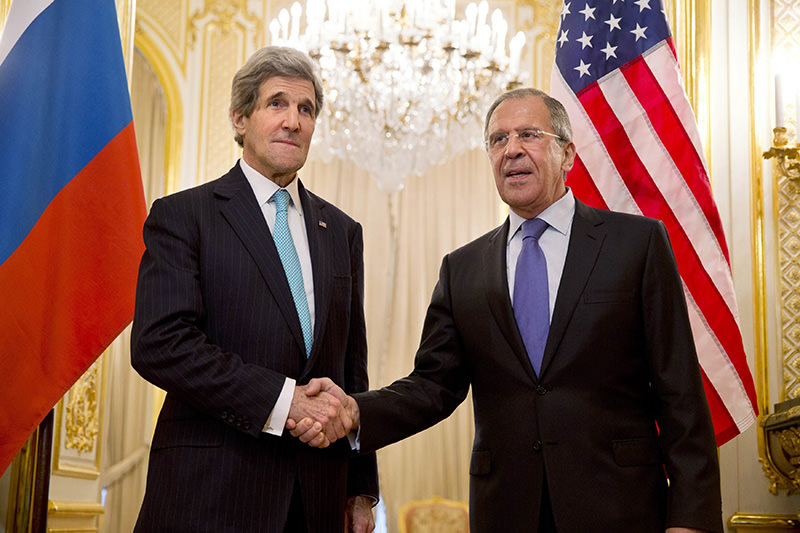 by German Press Agency - DPA
Jan 20, 2016 12:00 am
The chief diplomats of the United States and Russia are set to meet in Zurich Wednesday in an effort to bridge differences over who should be represented at the Syria peace talks next week.

The encounter between Secretary of State John Kerry and Russian Foreign Minister Sergei Lavrov at Zurich Airport is scheduled with just five days to go until the planned talks between the Syrian government and opposition in Geneva.

Kerry is set to travel to the Swiss mountain resort of Davos after meeting Lavrov to attend the World Economic Forum, where he is expected to discuss the Syria crisis with other diplomatic leaders.

Officials in Washington and Moscow have not ruled out that the Geneva peace talks will have to be postponed.

"We're not unmindful of the fact that there still remain differences of opinion and that this is a complicated process and that there's still quite a bit of work that needs to be done to get the meeting to occur," US State Department spokesman John Kirby told reporters Tuesday in Washington.

Moscow, which backs the Syrian government, does not want groups such as the Ahrar al-Sham to take a seat at the negotiating table in Geneva, while Washington would not oppose their participation.

In addition, Russia has lobbied for moderate Damascus-based opposition groups that are not involved in the military effort to oust President Bashar al-Assad to be invited.

Moscow and Washington also disagree on the future of al-Assad, who has lost all legitimacy in the eyes of the US administration.

More than 250,000 people are estimated to have been killed in Syria's conflict since it started in 2011 and developed into a war involving government forces, opposition rebels, extremists and Kurdish units, according to the United Nations.
Last Update: Jan 20, 2016 10:54 pm