Besieged by Syria regime and Hezbollah, civilians in Madaya struggle with cold, starvation 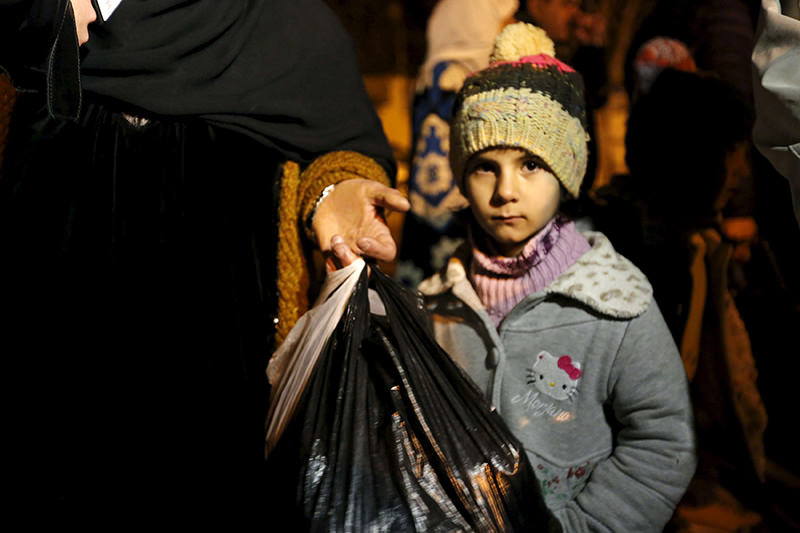 A Syrian girl waits to depart Madaya with her family in Syria January 11, 2016 (Reuters Photo)
by Anadolu Agency
Feb 02, 2016 12:00 am
The humanitarian situation in the Syrian town of Madaya -- which has been under siege by the Assad regime and Hezbollah for the last seven months -- continues to deteriorate day by day, with local residents dying of starvation and harsh weather conditions making life even harder for survivors.

Located northwest of capital Damascus, Madaya is currently home to some 40,000 people who remain in desperate need of assistance due to the ongoing siege.

Only two humanitarian aid conveys -- both dispatched by the UN -- have made it into the town, from which residents are prevented from leaving.

The aid shipments, however, have not been enough to prevent as many as 80 people from recently starving to death.

"We have no money and must cope with both hunger and cold," she said. "One liter of fuel costs nearly 6,000 Syrian lira [roughly $15] while a kilogram of wood for fuel is 600 Syrian lira [approximately $1.5]," she lamented.

"I cover my children with blankets to keep them warm. I don't know what else to do. We want the UN to help us. We urge the U.S., Qatar, Europe and Saudi Arabia to help us," she added.

Another Madaya resident, Um Safa, 45, said: "It's getting colder. We need fuel for heating. Please send us fuel. People are dying of cold. We want the roads to be opened and the siege to be lifted."

Ismail Abu Kadr, 61, another Madaya resident, said his family had only received two kilograms of rice from the recent consignments of UN aid.

"There are seven people in this family. What are we supposed to do?" he asked.

Located near the Lebanese border, the nearby town of Zabadani -- which saw heavy fighting last year -- is also under siege by the regime.

Regime forces have also besieged Zabadani -- the area's last stronghold of the anti-regime opposition -- to stop aid convoys from resupplying it from Lebanon.

A recent influx of people from Zabadani to Madaya has raised the population of the latter from 9,000 to 40,000.

Abdurrahman Abu Firas, 63, recently came to Madaya from Zabadani, which is located some 10 kilometers away.

According to Abu Firas, aid sent recently by the UN had sufficed for only 10 days.

"I can't even find firewood; people have begun burning their cupboards for fuel," he said. "We only want the siege to be lifted."