Peace talks in trouble after intense Russian strikes in Syria 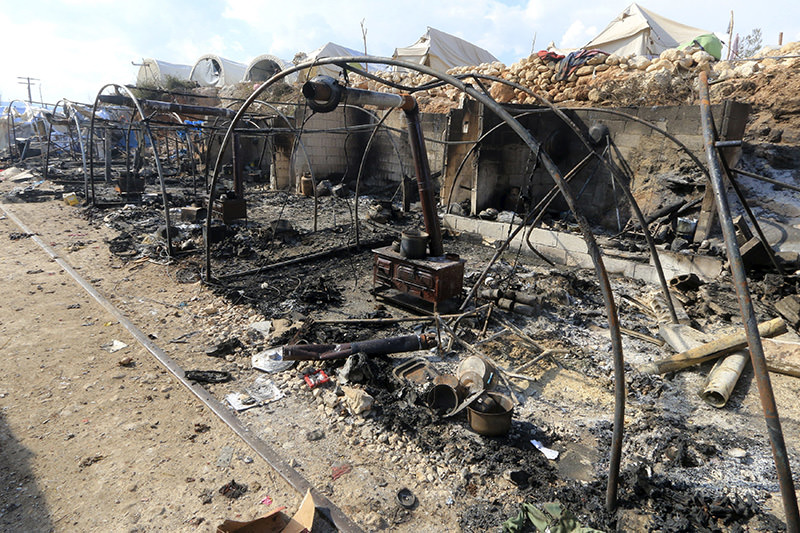 A general view shows the damage at a camp for internally displaced people after it was hit regime allied forces, Latakia province January 31, 2016 (Reuters Photo)
by Feb 02, 2016 12:00 am
The latest push to end Syria's tangled conflict was in fresh disarray Tuesday as the regime denied formal talks had begun and the opposition cancelled a meeting with the UN envoy following intense Russian air strikes.

The main opposition umbrella group attending the biggest effort yet to end the war called Russia's bombardment near Aleppo -- with 270 raids since Monday morning, according to monitors -- "unprecedented".

"Since last night a big massacre is taking place in Syria and nobody is doing anything. Nobody is saying anything, the international community is completely blind," said Salem al-Meslet from the High Negotiations Committee (HNC).

On Monday, UN special envoy Staffan de Mistura declared that indirect talks between the regime and the opposition had officially begun in Switzerland, saying he hoped to "achieve something" by February 11.

But chief regime negotiator Bashar al-Jaafari shot this down Tuesday, saying the talks were still "in a preparatory phase", that the opposition had failed to even name its negotiating team and that there was no agenda.

"We are still in the preparatory phase for indirect talks ... We still don't know who the opposition delegation is," Jaafari told reporters after meeting de Mistura, the third UN envoy for Syria since the war began in March 2011.

The opposition then cancelled a meeting with de Mistura scheduled for Tuesday afternoon, with HNC member Farah Atassi saying that "at this moment, there is no reason to repeat ourselves with de Mistura."

However, Interfax later reported that Russian deputy Foreign Minister Gennady Gatilov said de Mistura would again meet the opposition negotiators "tomorrow or the day after tomorrow" and that they "will explain their position and will announce the makeup of the delegation that will participate in talks",

The HNC has demanded the regime allow humanitarian access to besieged towns, stop bombing civilians and release thousands of prisoners -- some of them children -- languishing in regime jails.

It also expressed outrage at the regime offensive, backed by Russian jets and allied militants, that allowed regime forces to edge closer to breaking a long-running rebel siege on two regime-held Shiite villages in Aleppo province.

The Syrian Observatory for Human Rights, a monitoring group, said at least 18 civilians had been killed in the raids on Tuesday, including five women, three children and two emergency workers.

"We have never seen things like this since the beginning of the revolution," HNC spokeswoman Basma Kodmani said, calling the air raids "unprecedented".

US Secretary of State John Kerry weighed in Tuesday urging the Syrian opposition to remain in peace talks despite the Russian bombing, adding that he was "extraordinarily sympathetic" to their difficult situation.

"But the agreement at the United Nations and the agreement in Vienna is that when the political dialogue begins there will be a ceasefire. So the hope, the expectation is that it shouldn't take long and we're not requiring people to sit at the table for months," Kerry said.

Russia said it was willing to coordinate efforts toward a Syria ceasefire with the US, according to Interfax.

In a November meeting in Vienna, world powers agreed on an ambitious roadmap that foresees six months of intra-Syrian talks, leading to a new constitution and free elections within 18 months.
But it left unresolved the future of embattled Syria's Bashar al-Assad.

Since the conflict began in March 2011, more than 260,000 people have died and more than half of Syria's population have fled their homes.

The conflict has dragged in a range of international players, from Iran, Turkey and the Gulf states -- the latter two on the opposition side -- to Western nations and, since late September, Russia.

The chaos has also fuelled Daesh group which has overrun swathes of Syria and Iraq and staged a series of deadly attacks across the globe, including in Paris in November.
Last Update: Feb 24, 2016 8:48 pm
RELATED TOPICS