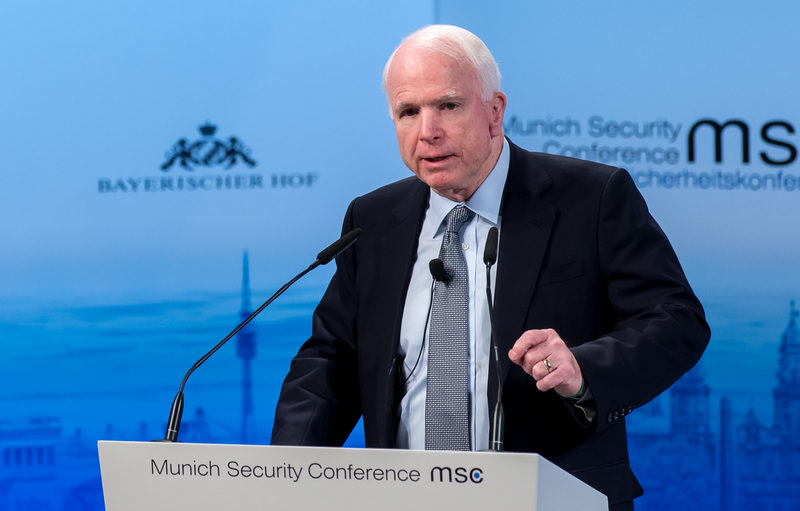 by Daily Sabah with AP Feb 14, 2016 12:00 am
Senior Republican U.S. Senator John McCain sharply criticized the deal to seek a temporary truce in Syria, arguing Sunday that Russia is engaging in "diplomacy in the service of military aggression" and will keep bombing Aleppo until Syria's Bashar Assad controls the situation.

Diplomats from a group of countries that have interests in Syria's five-year civil war, including the U.S., Russia, Turkey, Saudi Arabia and Iran, agreed on Friday to seek a temporary "cessation of hostilities" within a week. They also agreed to "accelerate and expand" deliveries of humanitarian aid to besieged Syrian communities beginning this week.

It remains unclear whether these commitments can be made to stick on the ground and whether deep differences regarding the truce and which groups are eligible for it between the U.S. and Russia, among others, can be overcome.

The cease-fire deal from the talks in Munich comes as Syrian government forces, aided by a Russian bombing campaign, are trying to encircle rebels in Aleppo, the country's largest city, and cut off their supply route to Turkey.

"I wish I could share the views of some of my friends who see this agreement as a potential breakthrough, but unfortunately I do not," McCain, who chairs the Senate Armed Services Committee, said at the Munich Security Conference.

"Let's be clear about what this agreement does: It permits the assault on Aleppo to continue for another week. It requires opposition groups to stop fighting but it allows Russia to continue bombing terrorists, which it insists is everyone, even civilians," he said.

"If Russia or the Assad regime violates this agreement, what are the consequences?" he asked. "I don't see any."

He said that Russian airstrikes will continue to hit Aleppo until Assad controls the situation on the ground.

McCain said that Russian President Vladimir Putin "is not interested in being our partner. He wants to shore up the Assad regime. He wants to re-establish Russia as a major power in the Middle East."

"This is diplomacy in the service of military aggression and it's working because we are letting it," he said.

McCain has long criticized the Obama administration's Syria policy, calling it a strategy "debacle," and had previously said that more arms should be given to Syrian opposition groups, including man-portable air-defense systems (MANPADS), to counter any kind of air force targeting them.

He had also made positive remarks on implementing a no-fly zone in Syria and ruled out U.S. Joint Chiefs of Staff Vice Chairman Gen. Paul Selva's statement in December that "political and military considerations are preventing it" from carrying into effect.

McCain said: "I must say it's one of the more embarrassing statements I've ever heard from a uniformed military officer, that we are worried about Syria and Russia's reaction to saving the lives of thousands and thousands of Syrians who are being barrel-bombed and massacred."

Ankara, which continues to voice the importance of a no-fly zone in Syria, is also seen as playing an "essential role" in maintaining regional security and stability by McCain, according to his statement in September.

Speaking at the 34th annual meeting of the American Turkish Council, McCain said that the partnership between the U.S. and Turkey was more important than ever due to the ongoing conflicts in Syria and Iraq.

The senator noted that Turkey, as a member of NATO, had committed not only to the collective self-defense and security of all NATO allies, but to safeguard its common values as well.

"The enduring value of our alliance has been made clear in recent years as the United States and Turkey have worked together to counter ISIS [DAESH]," McCain said.

He added: "I agree with Turkey's government that in order to succeed in destroying ISIS, we must also force Assad to leave power and end the conflict in Syria."