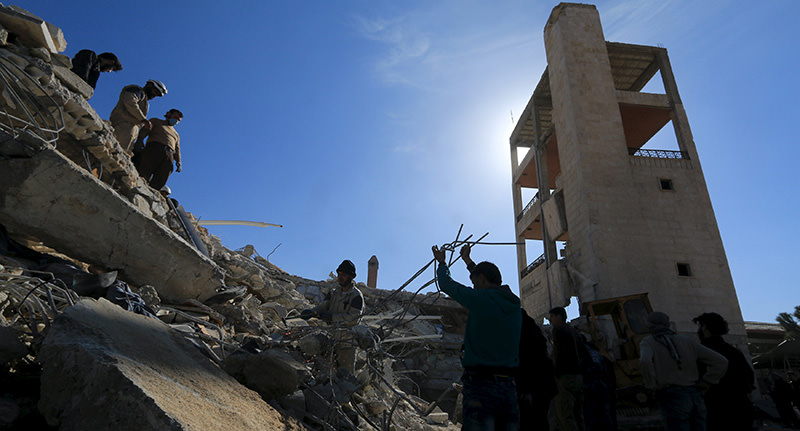 eople and Civil Defense members remove rubble while looking for survivors in the ruins of a destroyed Medecins Sans Frontieres (MSF) supported hospital hit by missiles in Marat Numan, Idlib province (Reuters Photo)
by Anadolu Agency Feb 16, 2016 12:00 am
Doctors Without Borders (MSF) representative Aitor Zabalgogeazkoa said there have been about 400 attacks on hospitals that killed some 700 health care workers during the crisis in Syria, according to a doctors Without Borders (MSF) representative.

Targeting these hospitals in Syria is a clear breach of international humanitarian law, Zabalgogeazkoa, the former head of mission for MSF in Aleppo, told Anadolu Agency after five medical units and two schools were hit in Monday's strikes in Syria which the UN says claimed around 50 civilian lives and injured dozens of people, including children.

He noted that there are 163 MSF-supported hospitals and three MSF health centers in Syria.

Zabalgogeazkoa's remarks echo the findings of a report by NGO Physicians for Human Rights - recently cited by Amnesty International - which has, before the latest assaults on Monday, recorded 336 attacks on medical facilities and 697 personnel killed since the conflict started in 2011. Of the 697 killed, 657 were at the hands of Syrian forces, still according to Physicians for Human Rights.

World Health Organization spokesman Tarik Jasarevic told Anadolu Agency: "WHO is appalled at the recent spate of attacks on health care facilities in Syria. Over the last two days, four hospitals have been attacked."

"Sadly, such attacks [...] are increasing in both frequency and scale. Since the beginning of the conflict, almost 700 health workers have been killed and an estimated 58 percent of public hospitals and 49 percent of primary health centers are either only partially functional or have closed," Jasarevic added.

"Attacks against health care are flagrant violations of international humanitarian law and human rights law, and contravene the right to health that is enshrined in the WHO constitution," he added.

Five medical units and two schools were hit in Monday's strikes which the UN says claimed around 50 civilian lives and injured dozens of people, including children.

The UN has condemned Monday's deadly airstrikes on hospitals and schools in northern Syria.

The UN human rights spokesman Rupert Colville told a news conference on Tuesday: "If it was deliberate, intentional targeting of those facilities, it could amount to a war crime."

"Clearly Syrian and Russian planes are very active in this area; they should know who is responsible, that is all l can say at this moment," Colville said in a press conference Tuesday.

The scale of attacks on schools and hospitals in Syria suggest that it was deliberate "war tactic", Colville added.
Last Update: Feb 16, 2016 6:29 pm
RELATED TOPICS