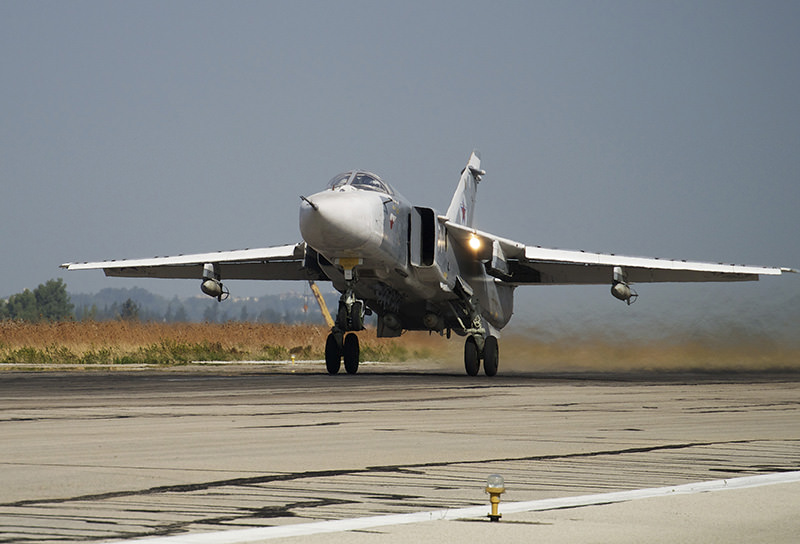 by Daily Sabah with Wires
Feb 28, 2016 12:00 am
Despite the first major cease-fire of the Syrian civil war appearing to remain intact on its second day, airstrikes believed to have been conducted by Russian or Syrian aircraft have continued to hit targets in Aleppo, the Hama provinces and the Turkmen-populated region of Bayırbucak yesterday.

According to the Syrian Observatory for Human Rights, warplanes believed to be either Syrian or Russian bombed seven villages in the provinces of Aleppo and Hama on Saturday. Rami Abdel Rahman, the head of the Britain-based monitor, said one person was killed in Aleppo.

Abdel Rahman said the identity of the jets is not clear. "We do not know which planes carried out the strikes and we are also not sure if this is considered a cease-fire breach because it is not clear if these towns are included in the truce," he said.

However, the Local Coordination Committees have said the warplanes were Russian.

Other attacks hit the villages and towns of Qabtan al-Jabal, Andan, Hreitan, Kfar Hamra and Ma'aret al-Arteek - all on the province's west side - where insurgents from the Free Syrian Army, who are covered by the truce, have conducted operations. Syria's state media did not mention the strikes and Russia's defense ministry declined to comment.

The Syrian Observatory for Human Rights has also said that more than 180 people were killed in Syria on the first day of the country's partial cease-fire. The Observatory said that 25 civilians were killed in shelling and gunfire in the country.
Russia, which has waged nearly five months of intense airstrikes in support of Syria's Bashar al-Assad, said on Saturday that it had halted bombing in all areas covered by the truce, adding that it will keep striking DAESH, Al-Nusra and other "terrorist groups."

Yet, in an address made during a Saturday conference held in the Turkish province of Antalya, the commander of the Syria Turkmen Front's Fatih Sultan Mehmet Brigades Mahmut Süleyman Zengin said that the Democratic Union Party (PYD) had attacked Turkmen positions in Aleppo less than an hour after the truce went into effect.

Also, according to Zengin, the Assad regime and Russian forces attacked Aleppo's Handarat region at 1:52 a.m. while regime forces also attacked the village of Acıbayır in the Bayırbucak region.

"There were 15 violations by the regime forces on day one of the cease-fire, including two attacks by (the Lebanese militant group) Hezbollah in Zabadani [west of Damascus]," said Salem al-Meslet, spokesman for the High Negotiations Committee.