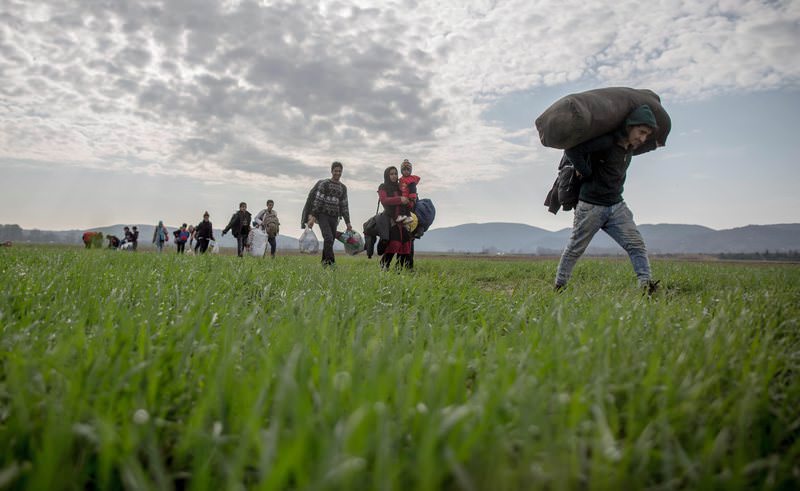 Refugees walk across a field in the direction of the refugee camp on the Greek-Macedonian border in Idomeni, Greece, 03 March 2016 (EPA Photo)
by Mar 03, 2016 12:00 am
EU President Donald Tusk on Thursday issued a stark warning to 'economic refugees' not to come to Europe, as he castigated countries for taking unilateral action to tackle the crisis.

On a visit to Greece -- on the frontline of Europe's worst refugee crisis since World War II -- Tusk told economic migrants it was pointless to apply for asylum in the European Union.

"I want to appeal to all potential illegal economic refugees wherever you are from: Do not come to Europe," Tusk told a press conference in Athens after talks with Greek Prime Minister Alexis Tsipras.

"Do not believe the smugglers. Do not risk your lives and your money. It is all for nothing."

And with thousands stuck on the Greece-Macedonia border after Austria and Balkan states began tightly restricting refugee entries, Tusk lashed out at "unilateral" actions by EU members as "detrimental to the European spirit of solidarity".

The border restrictions have left Greece with a huge bottleneck of refugees as Macedonia lets only a trickle through, with the EU estimating the number stranded in miserable conditions could be as high as 12,000.

Tsipras said he would like to see sanctions imposed on EU states that undermine joint decisions by the 28-member bloc.

"Greece will demand... that there be sanctions to those who do not respect (European solidarity treaties)," he told a press conference with Tusk.

The EU chief was in Athens as part of a regional tour on the refugee crisis ahead of a summit Monday between the EU and Turkey, the gateway for hundreds of thousands of migrants and refugees, many from Syria, hoping to start new lives in Europe.

Tusk was heading to Ankara for talks later Thursday with Turkish Prime Minister Ahmet Davutoğlu, who he will press for more "intensive" help in reducing the flow of refugees landing on Greek beaches.

It is the first time the bloc has responded to a situation within its borders in the same way as it treats humanitarian disasters in developing countries.

The United Nations has warned of a looming humanitarian crisis on the Greek-Macedonia border, where aid agencies have reported a lack of food and tents and warned that the wintry weather is taking a toll on people's health.

In bleak scenes, refugees have been forced to queue for hours for meagre food rations at the mud-soaked, overpacked Idomeni camp on the border.

With Macedonia tightly restricting passage across the border, only around 500 Syrian and Iraqi refugees have been allowed through since Tuesday, according to Greek police.

"Those who manage to arrive in Greece should not be allowed to continue on their journey," Sebastian Kurz told the Sueddeutsche Zeitung newspaper.
Last Update: Mar 03, 2016 2:01 pm
RELATED TOPICS