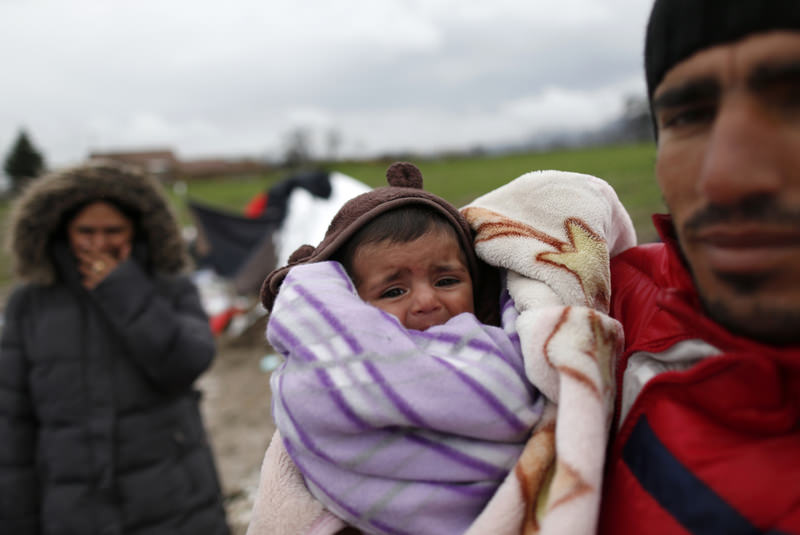 Yousif Shikhmous, a Syrian refugee holds his baby in an improvised camp on the border between Macedonia and Serbia near the northern Macedonian village of Tabanovce on March 11.
by Daily Sabah with AP Mar 12, 2016 12:00 am

Desperate migrants crowd in fetid fields of mud at a closed border crossing as officials warned that a well-trodden route to Europe used by hundreds of thousands in the past was no longer available.

With the closure of the migrant trail through the Balkans from Greece to more prosperous countries, concern also mounted that people desperate for sanctuary or jobs in Europe were already turning to smugglers to find other routes.

Government ministers and experts say that Albania, Hungary, Bulgaria and Romania could become alternative tracks, and Spanish officials have been in contact with Algeria and Morocco to try to stop new routes from opening up there.

The influx has continued to the Greek islands by migrants who have not heard the Greek-Macedonian crossings are no longer open, or those who hope the closure is temporary. But some did not make it. Anadolu Agency (AA) said five people, including a 3-month-old, drowned when their speedboat sank on Thursday off Turkey's western coast en route to the Greek island of Lesbos. Nine people were rescued from the boat, which was carrying Afghans and Iranians, AA said.

NATO Secretary-General Jens Stoltenberg said the alliance has stepped up its operations to try to stop smugglers, deploying five ships in the Aegean Sea and has plans to send more in the coming days to monitor the area near the Greek island of Lesbos and areas farther south.

Nearly 42,000 people are currently stranded in Greece, including 14,000 camped in the mud near the Idomeni crossing with Macedonia. Nearly three days of rain has finally ended, but that did little to lift the spirits of those staying in donated pup tents in nearby fields and along railway tracks.

Long lines of migrants waiting for sandwiches, tea and soup are a feature of the Idomeni camp, which surpassed its capacity long ago. Others warm themselves at fires using what dry wood they can find, or pour oil on sodden logs to get them to burn. The fields have grown increasingly fetid, with pools of water and deep mud that sucks the shoes off children. People have dragged their muddy tents to new locations, looking for a dry patch of ground.

Many people who have spent days at the camp in chilly temperatures were coughing badly.

A crowd formed at a truck of donated goods, with men tossing bags of diapers, toilet paper, bottled water, yogurt and prepared meals to the cheering crowd. Dozens of packaged meals ended up falling to the ground, with cooked pasta and yogurt splattering in the mud.

"May God take his revenge on everyone who did this to us from whatever country they come from," said Raife al-Baltajy, a Syrian from near Aleppo, as she waited for a bus with her family. "May God take his vengeance out on them. Isn't it sinful? Are we animals? Or are we human beings? … Under this rain, in the cold; who wants to protect us?" she said.

Government health experts say there is no sign yet of infectious disease at the camp, but they have been urging people to move to nearby army-built shelters. Authorities say about 70 children at the camp have received treatment in the past three days for fever and diarrhea.

Germany was critical, despite the benefits of having to cope with a big drop in migrant flows due to the border closures prompted by Austria's decision to impose a cap on refugee numbers. That "brings us fewer refugees, but on the other hand puts Greece in a very difficult situation. And this situation is not durable and sustainable," Austrian Interior Minister Johanna Mikl-Leitner said.

More than 1 million people have come to Europe in the past year, fleeing war, persecution or abysmal poverty. Once taken to the Greek mainland from their island arrival points, most headed to the Macedonian border, then onward to Serbia, Croatia and Slovenia, before moving on to Austria and other prosperous EU nations.

Passage through those nations began being restricted last month, and on Monday, countries along the Balkan route decided to allow entry only to people with valid EU visas. But even as those countries shut their borders, others braced for an influx of people taking alternative routes and risking new dangers in their search for a new life.

Frontex, the EU's border agency, said contingency plans are in place to address any big shifts in migrant movements, with the organization's deputy executive director, Berndt Korne, naming Albania, the western Greek coast and Montenegro as possibilities. Once spring arrives and the weather improves, people could also turn back to the dangerous route across the Mediterranean from Libya to Italy. Thousands have died off the Italian island of Lampedusa in recent years attempting that crossing.

The majority of migrants come from the Middle East and Africa. The turmoil in the Middle East and the five-year civil war in Syria have led many people to flee the conflict in an attempt to seek security and shelter in more prosperous and peaceful countries, such as those in Europe. However, Europe has been slammed for failing to establish a collaborative response to the crisis, as a series of border crackdowns have left thousands of migrants stranded at borders crossings.