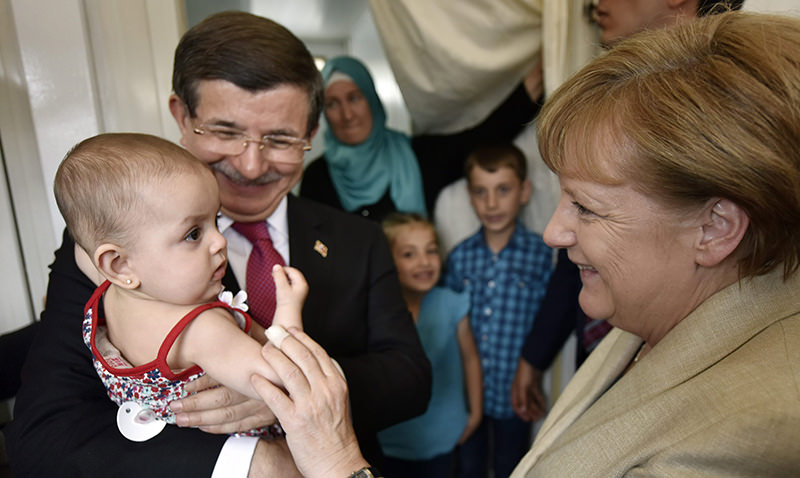 German Chancellor Angela Merkel (R) and Turkish Prime Minister Ahmet Davutou011flu talking to a family of refugees, while Davutou011flu holds the family's youngest child, as they visit the Nizip I refugee camp (EPA Photo)
by Anadolu Agency Apr 25, 2016 12:00 am

The German government will complete payment of €428 million ($482 million) out of the €3 billion ($3.4 billion) agreed in the refugee deal between Turkey and the EU by 2019, a German Finance Ministry spokeswoman said Monday.

Addressing a press conference in Berlin Monday, Finance Ministry spokeswoman Friederike von Tiesenhausen said Berlin will pay its share "in 2016, 2017, 2018 and the third and fourth quarter of 2019."

Also, €1 billion out of the €3 billion will be paid from the common EU budget, while the other €2 billion will be up to the "EU state members to meet their shares individually," she added.

The multi-billion euro facility is part of a joint EU-Turkey refugee action plan, under which the bloc has pledged aid to meet the needs of refugees in Turkey; a visa liberalization process with the 28-nation alliance and speeding up the candidate country's accession talks in exchange for stemming the flow of refugees seeking to enter Europe via Turkish shores and borders.

According to the agreement, the EU is supposed to provide €6 billion ($6.8 billion) in aid to help Turkey care for millions of refugees. The EU will disburse the initially allocated €3 billion ($3.4 billion) under the "Facility for Refugees in Turkey" and ensure funding of further projects for persons under temporary protection identified with input from Turkey.

According to EU-Turkey statement released on the bloc's official website on March 18, a list of projects for refugees in the field of health, education, infrastructure, food and other living costs, which can be swiftly financed from the facility, will be jointly identified. "Once these resources are about to be used to the full, and provided the above commitments are met, the EU will then mobilize additional funding for the facility of an additional €3 billion [$3.4 billion] up to the end of 2018,​" according to the statement.