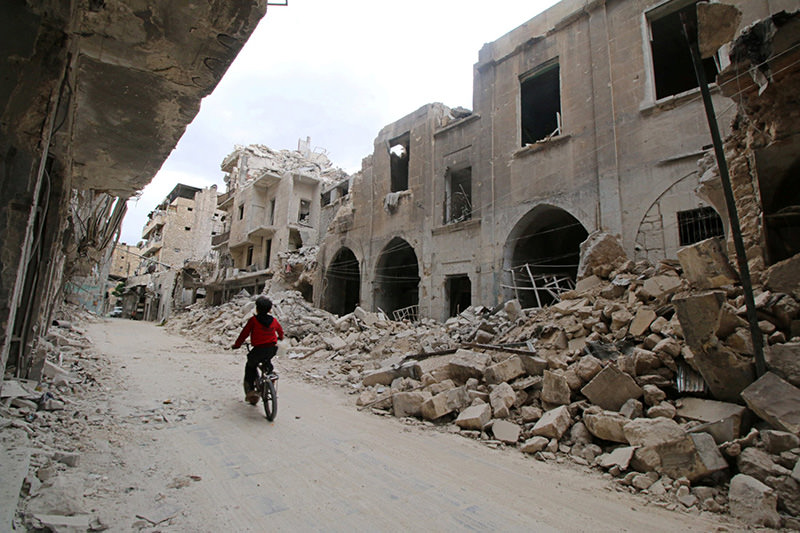 The capture of Khan Touman was a rare setback for government forces in Aleppo province in recent months, and for allied Iranian troops who suffered heavy losses in the fighting.

Warplanes continued to strike around the town on Monday, and had carried out more than 90 raids in the area since Sunday morning, the British-based Syrian Observatory for Human Rights said.

Al Manar television, run by Damascus's Lebanese ally Hezbollah, said troops had destroyed a tank belonging to insurgents and killed some its occupants.

Khan Touman lies just southwest of Aleppo city, which is one of the biggest strategic prizes in a war now in its sixth year, and has been divided into government and rebel-held zones through much of the conflict.

Russia's military intervention last September has helped President Bashar al-Assad reverse some rebel gains in the west of the country, including in Aleppo province.

The Observatory said warplanes struck rebel-held areas of the city early on Monday, and rebels fired shells into government-held neighborhoods, despite a Russian-announced extension of a truce encompassing the city of Aleppo.

"It is not Daesh that is being attacked in Aleppo, it is the moderate opposition," he said.

Ayrault said Monday's meeting would call on Russia to put pressure on Assad to stop the attacks, adding that humanitarian aid must be allowed to reach those in need.

"Talks must resume, negotiations are the only solution," he said on radio RTL, ahead of a meeting of ministers from the United States, Saudi Arabia, Qatar, United Arab Emirates, Turkey and Britain. Also attending was Riad Hijab, chief coordinator of the main Syrian opposition negotiating group.

The surge in bloodshed in Aleppo, Syria's largest city before the civil war, wrecked a February "cessation of hostilities" agreement sponsored by Washington and Moscow. The deal excluded Daesh and al Qaeda's Syrian branch, the Nusra Front.

Peace talks in Geneva between government delegates and opposition figures, including representatives from rebel groups, broke up last month without significant progress.