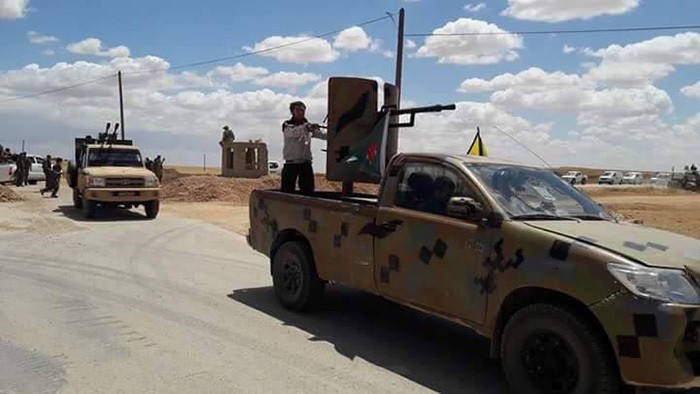 Hundreds of thousands of residents living in the DAESH terrorist organization's stronghold of Raqqa in northeastern Syria have begun to leave the area since the U.S.-led anti-DAESH coalition began their military operation there. The operation is being undertaken in cooperation with the Syrian Democratic Forces (SDF), which is dominated by the PKK's Syrian affiliate, the Democratic Union Party (PYD)'s armed wing, the People's Protection Units (YPG).

Citing local sources, Anadolu Agency reported that almost 300,000 people have headed towards the regions of Bab, Manbij, Jarablous and Çobanbey in northern Aleppo together with Dayr az-Zawr in the south. These areas are controlled by DAESH and it is as yet unclear whether the terrorist organization will allow people to enter the areas controlled by groups of the moderate Syrian opposition.

Within the scope of the operations in Raqqa, military sources speaking on condition of anonymity said that U.S. A-10 Thunderbolt fighter jets from the coalition have taken off from Turkey's İncirlik Air Base, located in the southern province of Adana, to attack Raqqa with laser-guided bombs targeted at previously marked DAESH targets.

It was also reported that there have been fierce clashes between the SDF and DAESH in a village located in northern Raqqa. Two footholds north of Raqqa, the border town of Tal Abyad and the smaller town of Ain Issa between Tal Abyad and Raqqa city, have already been seized by the SDF.

Statements from the YPG-dominated SDF forces demonstrate that the group does not simply aim to purge the city of DAESH. Rather, their plan is to annex opposition areas to those controlled by the PYD in northern Syria on the way to establishing an independent PYD-state.

Speaking to Russia-based RIA Novosti on Thursday, a representative of the PYD in Northern Iraq, Gharib Hassou revealed that this was indeed the agenda, saying: "Since the assault on Raqqa was carried out by the SDF, it makes sense that after its recapture, the city will become a part of the democratic federal system created by us in Northern Syria."

In September last year, thousands of Turkmens and Arabs fled to Şanlıurfa in Turkey after the YPG seized Tal Abyad, a northeastern town of Syria. Claims of ethnic cleansing were levied on the YPG and raised Ankara's concerns about national security. More than a dozen Syrian opposition groups also urged the PYD to stop committing "ethnic cleansing" against Arabs and Turkmens in northern Syria.

Last week, U.S. General Joseph Votel visited Syria and met with SDF senior officials. A CENTCOM spokesman commented on the visit: "He met with U.S. military advisers working with Syrian Arab fighters, and with leaders of the Syrian Democratic Forces."

Ankara has frequently voiced its concern over YPG activity along the Turkish border and has been rigid in its stance to not allow the PYD militant group to found any de facto Kurdish state in northern Syria. Turkey claims the PYD enjoys close connections with the PKK, including militant and ammunition support through underground tunnels.
Last Update: May 26, 2016 5:04 pm
RELATED TOPICS