5 onboard Russian Mi-8 helicopter shot down in Syria killed 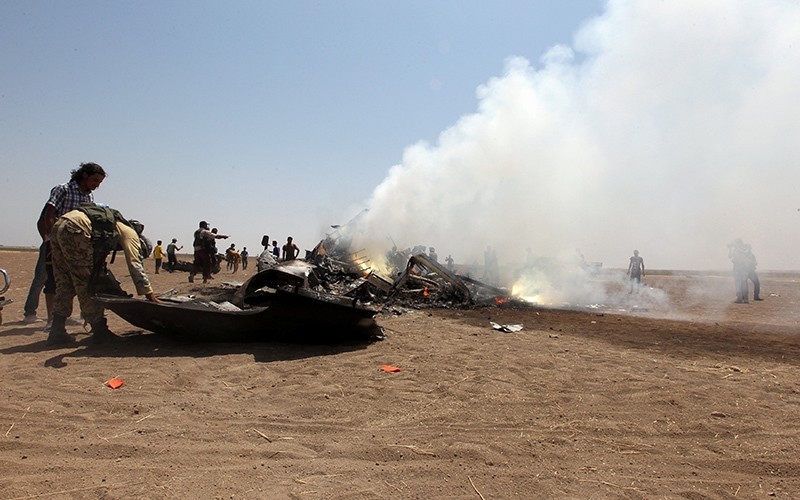 Rebel fighters and civilians inspect the wreckage of a Russian helicopter that had been shot down in the north of Syria's rebel-held Idlib province (Reuters Photo)
by Daily Sabah with Agencies Aug 01, 2016 12:00 am

Kremlin said that all five people aboard the helicopter shot down in Syria were killed.

A Russian Mi-8 helicopter was shot down in Syria on Monday, killing all five people on board, Russian President Vladimir Putin's spokesman said.

A Russian Mi-8 military transport helicopter was shot down from the ground after delivering humanitarian aid to Aleppo," the defense ministry said in a statement quoted by Russian news agencies. "Three crew members and two officers... were on board," it said, indicating that their fate was unclear.

Meanwhile, the Syrian Observatory for Human Rights monitor said a helicopter crashed in the north of Syria's rebel-held Idlib province on Monday, and the pilot was taken from the wreckage. Images shared on social media purportedly showed a dead body and Russian identity documents taken from the crashed helicopter.

The pro-opposition television news outlet Orient News said opposition forces had shot down a Russian military helicopter, and that the pilot had died.

If the Russian crew and officers are confirmed killed, it would be the deadliest single incident for the Russian military since September, when Moscow began carrying out airstrikes in Syria in support of Assad regime forces.

There was no immediate claim of responsibility for the helicopter incident. Idlib province has a strong presence of both fighters for the al-Qaida branch in Syria known as the Nusra Front and rebels. The group announced last week that it was changing its name and relinquishing ties with al-Qaida in an attempt to undermine a potential U.S. and Russian air campaign against its fighters.